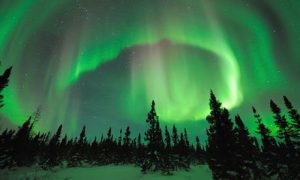 This weeks addition of Wednesday Wanderlust takes us to various Northern nations and captures the beautiful northern lights. This footage from Anneliese Possberg and the score by Pablo J. Garmón will certainly take your mind to a far away place.

Science explains the northern lights like this: “When charged particles from the sun strike atoms in Earth’s atmosphere, they cause electrons in the atoms to move to a higher-energy state. When the electrons drop back to a lower energy state, they release a photon: light. This process creates the beautiful aurora, or northern lights.”

For centuries, indigenous cultures around the world had to make up their own explanations and theories about the significance of the lights. The Fox Indians, who lived in Wisconsin, regarded the light as an omen of war and pestilence. To them the lights were the ghosts of their slain enemies who, restless for revenge, tried to rise up again. The Salteaus Indians of eastern Canada and the Kwakiutl and Tlingit of Southeastern Alaska interpreted the northern lights as the dancing of human spirits. The Eskimos who lived on the lower Yukon River believed that the aurora was the dance of animal spirits, especially those of deer, seals, salmon and beluga.

One thing is clear, whatever your beliefs, the northern lights are one of the worlds truly awe inspiring natural events.

OUR DOG BLUE
Scroll to top