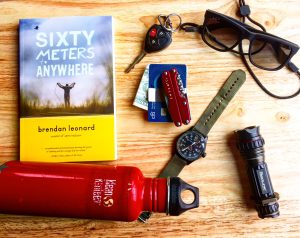 Last night I had the pleasure of meeting Brendan Leonard and we spoke about the release of his New Book, Sixty Meters to Anywhere. If you are interested in hearing him speak he will once again be doing a book signing at REI in Des Moines tonight, Wednesday October 26th, 2016 at 6;30pm.

However, Dirt Orcas is giving away a signed copy of his book. For a chance to win, you just need to ‘like” the Dirt Orcas Facebook page and share this post. The drawing will take place Tuesday Nov. 1st.

If you aren’t already familiar with Brendan’s work, you can check out his website semi-rad.com or find his work in any number of outdoor publications including Climbing, Outside, Men’s Journal, Alpinist, Adventure Cyclist, Backpacker, Sierra, High Country News, and Canoe & Kayak. So not only is he a super nice guy, he’s also kind of a big deal.

Brendan has created a much needed voice within the outdoor community that regularly walks back and forth between humorous Venn-diagrams and thoughtful essays.

I certainly enjoyed speaking with him.

There’s a common phrase in the literary community that goes “Everyone has one great book in them, but in most cases that’s where it should stay”. This is your third book – Tell us a bit about the motivation for Sixty Meters to Anywhere. What made you want to tell this story now?

I started writing some of the stories in this book back in 2003, for a class at the University of Montana, and have been pitching the book since about 2008. The fact that it’s out right now is just the result of a publisher finally saying yes, and I’m actually glad it took this long, because the past five years really formed a lot of the last third of the book.

I went on a road trip with my friend Mick in 2010, and he really showed me that travel is more fun if it’s more wandering than a to-do list, and I still fight the urge to try to “get things done” on trips. Which I think is something most Americans probably deal with on some level or another. It’s hard to not try to plan/script our trips, but whenever I wing it, I always have more fun.

You have found a strong place in the community of travel/adventure writers. What values do you think your home town instilled in you, that you take on the road and bring to your work?

Oh man, everyone says this, but the idea of work is something I learned in my hometown (Brendan grew up in Iowa) —the reward of sticking with something until it’s finished, doing what you say you’re going to do, and not being above real work that’s not “fun” or “fulfilling” or “my thing.” If you’re not humble enough to clean a bathroom, I’m not sure what to think about that.

As a writer, your words are your meal ticket. Do you think that living a transient adventure based life helped you develop your craft or at the very least give you more material?

I think living in my van coincided with more and more adventure writing gigs coming my way, but it didn’t have so much to do with being transient as it did the fact that I’d been working at that for a long time. It probably had more to do with my starting a blog and keeping at it every week than it did with the fact that I lived in a van and could travel to wherever I wanted. But yeah, it probably gave me more material too.

I admire your outside the box approach to career and home. Do you see yourself as somebody who took a leap of faith to live in an unconventional way or do you think it kind of just happened?

I think of it more like backing away from things I don’t want to do until I arrived where I’m at now, although it did involve several leaps of faith: quitting a good job and taking a pay cut to work at an outdoor nonprofit, moving into my car and living on the road for three years, quitting another good job and deciding to try to make a full-time living as an adventure writer. For about a year and a half, I pretty much looked at every big decision and made myself choose the less secure option, or the opposite of our idea of “security,” and that made all those future “big decisions” less scary.

KAT CARNEY: WHEN THE OUTDOORS IS YOUR OFFICE

WEDNESDAY WANDERLUST (ON FRIDAY) – HOUSE OF TRAVEL
Scroll to top