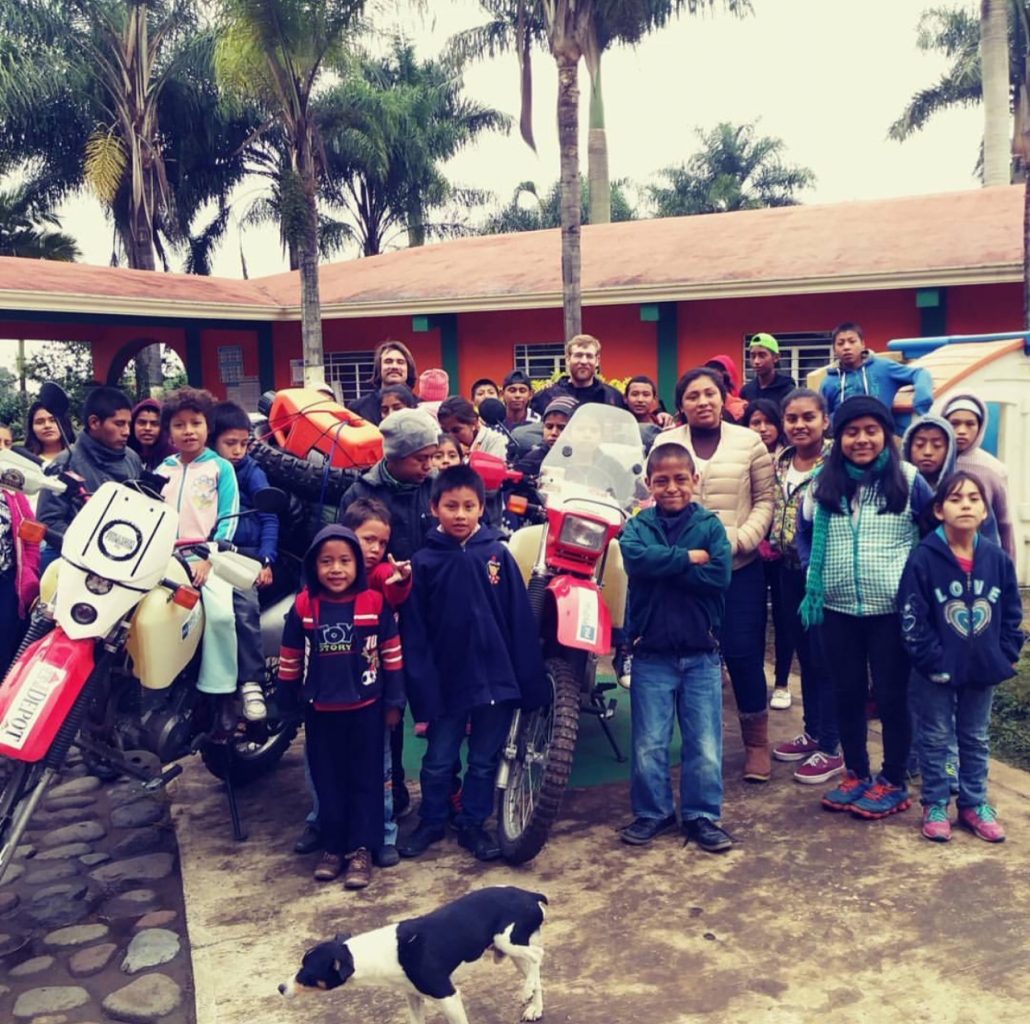 For the seventy third installment in our ongoing interview series here at Dirt Orca’s we are very please to speak with Ross and Seth Naylor, brothers who you might know from their charitably charged enduro ride to South America called the @20000milecharityride.

I was alerted about these two by a former interview subject and another fellow Iowan, Anna Anderson. (Check out the interview we did with Anna here).

Ross and Seth work here in Iowa for a construction they own called Renomads LLC., but they teamed up with a charitable group called the World Riders Foundation to help raise money to build schools for orphan children in developing nations. You can learn more about the project and donate to the cause here.

I have been following their journey through their Instagram account, @20000milecharityride.   I highly recommend giving them a follow and staying up to date with what they are doing.

Seth and Ross are terrific reminders that there are many ways to fulfill your dreams of riding to South America. If you can help others while pursuing those dreams all the better.

Check out our interview below. 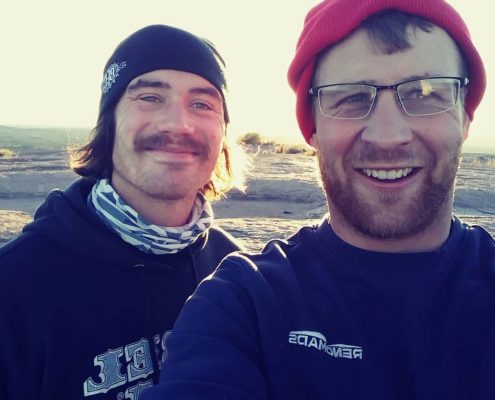 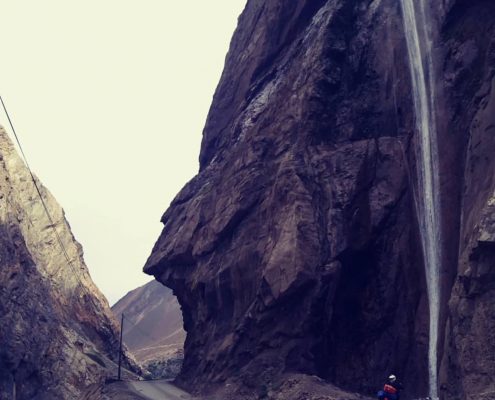 Our business entity is formally known as Renomads LLC.  However, as owners of the business we consider the world our office.  Opportunities find us as we journey through this life.

Tell me about your (Year, Make, model) bikes. What do you call them?

To us these are modes of transportation, we have not made friends out of them and as result they haven’t shared their names.

Both bikes were purchased summer of 2017 with the intention of riding them to the southern tip of South America.  Seth’s bike was bought from a friend in Des Moines with 17,000 miles.  Considering our trip at hand, we wanted identical motorcycles, so we only needed to carry one variety of spare parts.  As a result, we needed to travel to Nebraska for a twin moto.  Ross’s bike was purchased in Lincoln with a previous 2,000 miles on it.

Initially, we considered backpacking and then we talked about purchasing a 4WD, after which, we thought why the hell not ride a couple pigs to the end of the planet.

That left us with picking out motorcycles that were apt for the mission at hand……The enduro breed. Beings that we are not trust fund babies (BMW, KTM, $$$) we looked at the Suzuki DR650, Kawasaki KRL650, and lastly the Honda XR650L.  We pulled the trigger on the Honda because it was the first to become available with a deal, also, it’s a beast.

Oh yea we did!….. Although the Honda is a beast now their frikking DRAGONS! 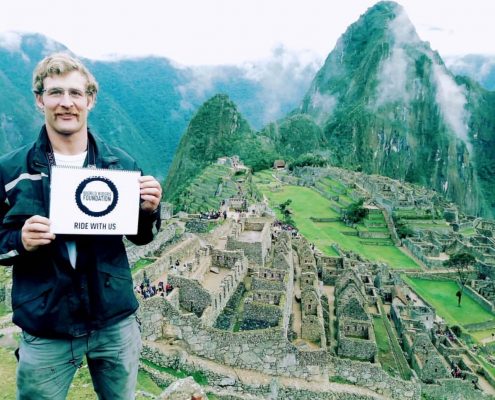 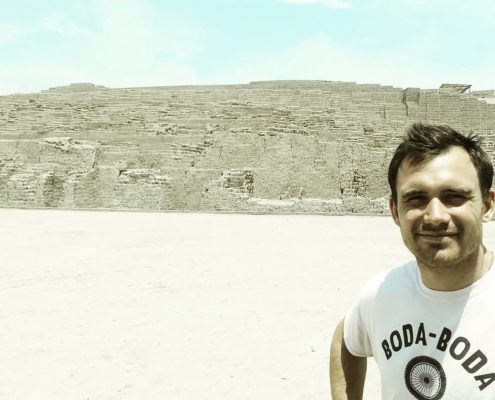 This is a hard question for us because the answer has to do with freedom.  Although we enjoy the lifestyle the motorcycles provide, we found out long before (4 years ago) freedom of life choice/direction was imperative to our happiness and journey.  So, to answer your question, our favorite part of living the life we lead is our freedom to do as we please when we choose.  Other than that, there is definitely something different from our camper in Iowa, or the station wagon in Australia; something about the wind blowing through our hair, being a transient part of nature with no barrier between us and the outside world.  Living on a motorcycle, there is no outside world.

You wake up in your tent from the humid heat after last night’s storm.  Unfortunately, the night before, you scrambled to unpack your belongings because you were caught in the middle of nowhere in a downpour with no hotels insight.  Thunder kept you up most of the night and now you must travel nearly 200 miles to your next destination where you can find refuge.  Beings that your clothes are soaked you decide to wear your only dry gear which is smelly and over worn.  Hungry, you hit the road seeking a good meal to heal the pain in your stomach and some coffee to help with the headache.  Finding the only restaurant (tarp covered shack) in 50 miles you enjoy lukewarm coffee and mystery meat.  The hours pass and just as the afternoon rain begins your stomach begins to churn.  Suddenly, your rear tire goes flat, and you find yourself hitchhiking to the nearest tire shop. Barely making it to the shop, you thrust your way out of the car only to sprint to the ditch and squirt out your mystery meat.

This experience is only possible on a bike.  However, one will never appreciate a comfortable bed and a warm meal under a dry roof anymore than after the stated scenario.  For some, finding a nice place to bed down might result in one of the happiest moments a person can experience.

We would consider our journey to the southern tip from our home state of Iowa the best thing we could do with our bikes.  Again, that was our original intention as Seth only obtained his motorcycle license two months before we departed on our voyage.  In view of our journey it is difficult to determine the best place we’ve taken our bikes.

The food in Mexico took our taste buds to new heights.  Guatemala’s scenery was bursting with life and was as green as it gets.  The beaches of El Salvador and Nicaragua were blissfully tranquil.  South America has tested the capabilities of the Honda with the Andes Mountains adding twists and turn, dips and dives and stunning vistas which are indescribable on paper.  We are currently in Huaraz, Peru after a 6 hour ride on a dirt track cliff hanger complete with waterfalls, rivers, desert, and snow-capped peaks. From our understanding, the riding continues to impress until Argentina, so we are excited for what each new day offers. 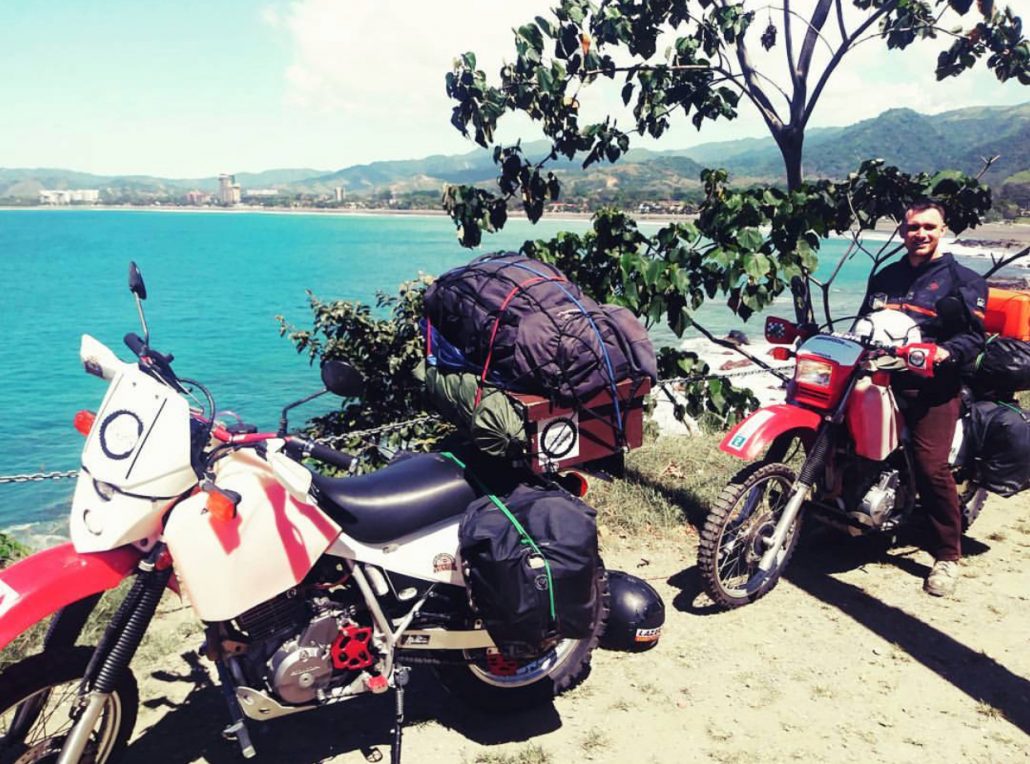 We think it is yet to come.  Bolivia contains some of the worlds most dangerous (AKA most scenic, jaw dropping, fun) and highest altitude roads in the world.  We are especially looking forward to the Salar de Uni, the world’s largest salt flats.  Here, we can make our own roads in giant circles at 140km’s/hr.

Check your oil, don’t be a dipstick!

As brothers growing up in the affluent town of Ankeny, Iowa we were presented the typical pressures of society.  Because of the nature of American Culture, we experienced the end goal programming pushed on individuals.  However, there was something different about our understanding of our place in the world. Maybe our household upbringing, maybe just who we are, but it seems we weren’t as susceptible to these pressures.  Following the wishes of parents, we both attained university degrees but refused the corporate enigma/agenda that seemed to be the typical course.  Following our hearts and wishing to discover greater purpose in the world we fled the United States for Australia at the ages of 22 and 23. We sold everything but our tool belts and a bag of clothes and proceeded to live and work for one year down under.  We think individual happiness is contingent on the pursuit of lifelong learning; for us, a change in culture provided just that.  Stepping outside the American box, our perspectives were permanently altered.  We enjoyed waking up each morning to a brand-new day we had never experienced before.  This is the journey we are on and will continue to pursue. 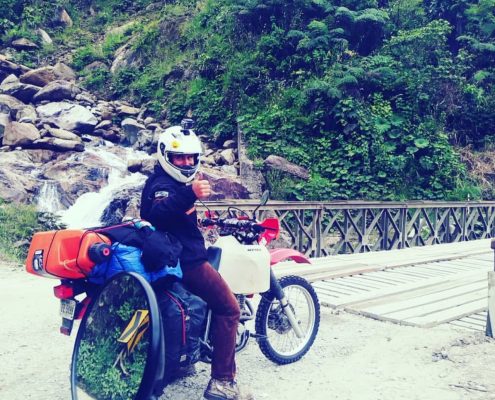 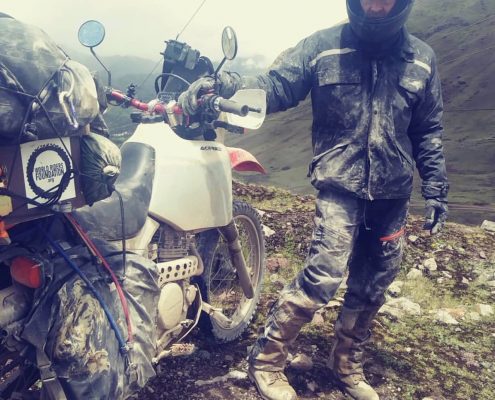 The most important quality our family provided during our upbringing was the necessity to work hard for our goals.  Not only that, it is important to present yourself as someone who is not afraid of a challenge and will give everything you possess to obtain it.  The interesting thing about this quality is that you don’t need words.  Hard work is action oriented.  People recognize your efforts and respect you because of what you do, not because of what you say.  As far as this trip goes, and most adventures, they are not vacations and for the faint of heart.  Adventures are a lot of work and only the salt of the earth can reap the benefits provided by such an experience.

For sure a leap of faith.  Many days we feel like outsiders and it is difficult to move against the grain.  The direction we have chosen does not have a pre-existing path.  In a way we are trail-blazers and most days it’s scary and difficult because we don’t know where this road will lead.  We must remind ourselves the direction we’ve chose is the result of observing the standard for which we don’t want.  We cannot act as the norm and expect different results.  We hope what we’ve chose will provide what we’re looking for which is not an end-goal, but a journey filled with learning, love, and life.

As we’ve stated, more than anything else, our lives involve hard work. Although we’ve raised $20,000 for World Riders Foundation on our ride, all our expenses have been paid out of pocket.  So, our next move is to go home, to Ankeny, Iowa and return to building our business, Renomads.com.  After the last five years of rugged living/surviving we hope to build a life that is a little more comfortable and maybe find other people to share it with.  We wouldn’t mind traveling a bit more of the United States and sharing our new-found experiences and perspectives with others. 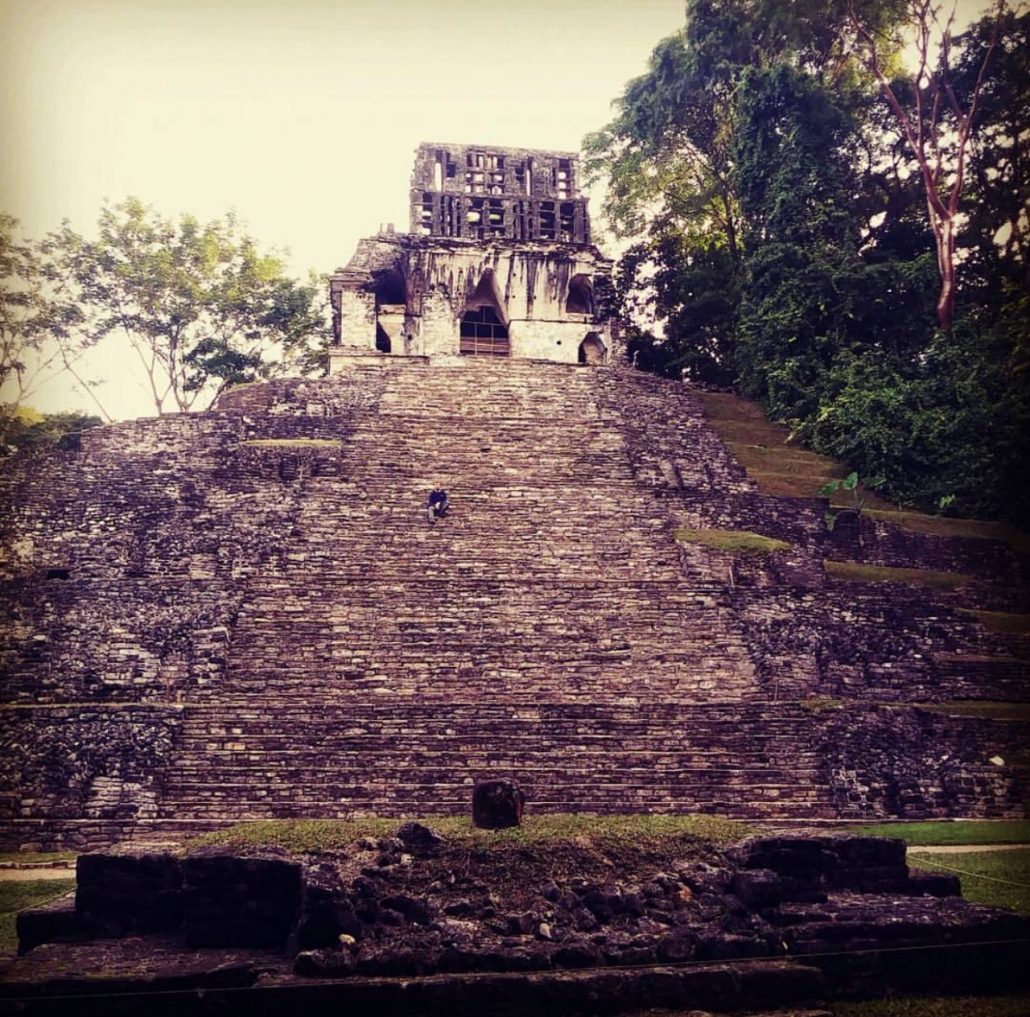