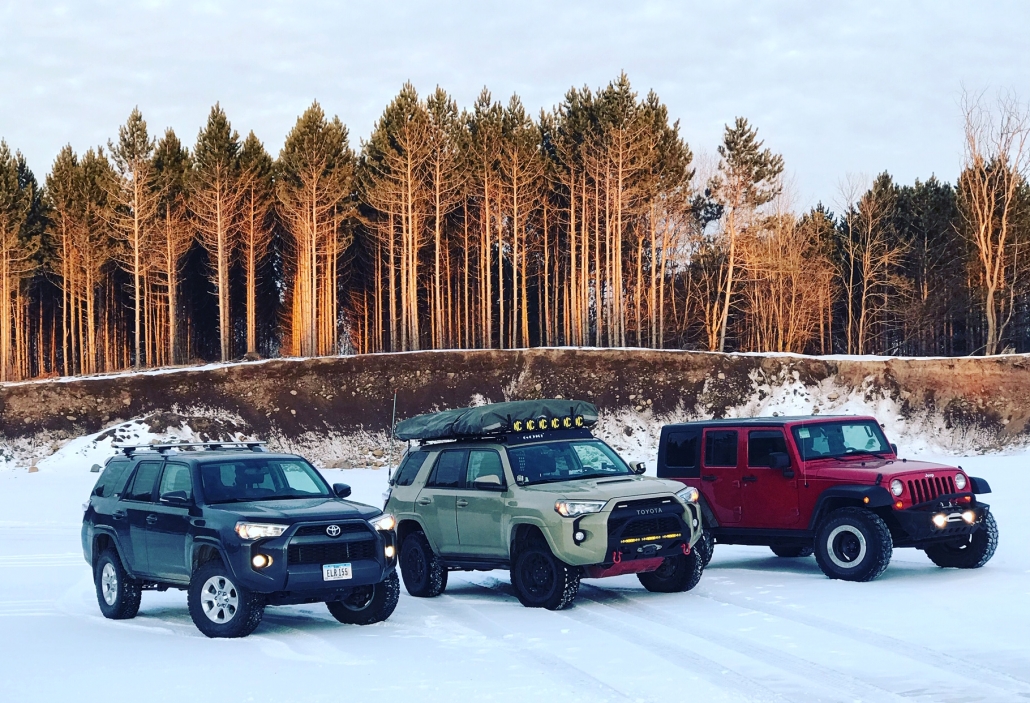 Running the Trans Wisconsin Adventure Trail in January may seem like a bad idea to many people but I recently set out to run the Northern portion of the trail from Black River Falls up to Bayfield, WI with the intention of experiencing the land in a new season. I was joined by @overlandiowa and @seven_slot_overland.

The Trans Wisconsin Adventure Trail begins on the Illinois/Wisconsin boarder near Galena and traverses the entire state of Wisconsin on trails and forest service roads until you dead end into Lake Superior at the North end of the state. We opted start the trail from Black River Falls because we wanted to spend more time in the more exciting parts of the route like the Chequamegon-Nicolet National Forest Area and then around the Apostle Islands National Park area. Both in the northern 3rd of the route. I have also previously run the entire trail on my BMW GS and also in my 4Runner. So returning for the third time, I opted to cherry pick my favorite sections.

With temps just above zero our first night on the trail, we really tested our winter camping setups. I met up with Cullen from @overlandiowa at the Castle Mound campground outside Black River Falls, in the Black River State Forest. Cullen (in his 2016 Toyota 4Runner TRDPro) was experimenting with a new rooftop tent, while I had carved out some space in the rear of my 4Runner for a temporary home. Both of us were accompanied by Mr. Buddy propane heaters to help keep the frigid temps away long enough to get some sleep. He had a better experience with that. He was able to simply set his heater up inside his rooftop tent and drift off to sleep. However, due to the clearances necessary to safely run the little heaters that I couldn’t quite meet inside the vehicle, I ended up running the heater only while I was awake to bring up the temperature of the rear cabin. Which was still helpful, but not as comfy. 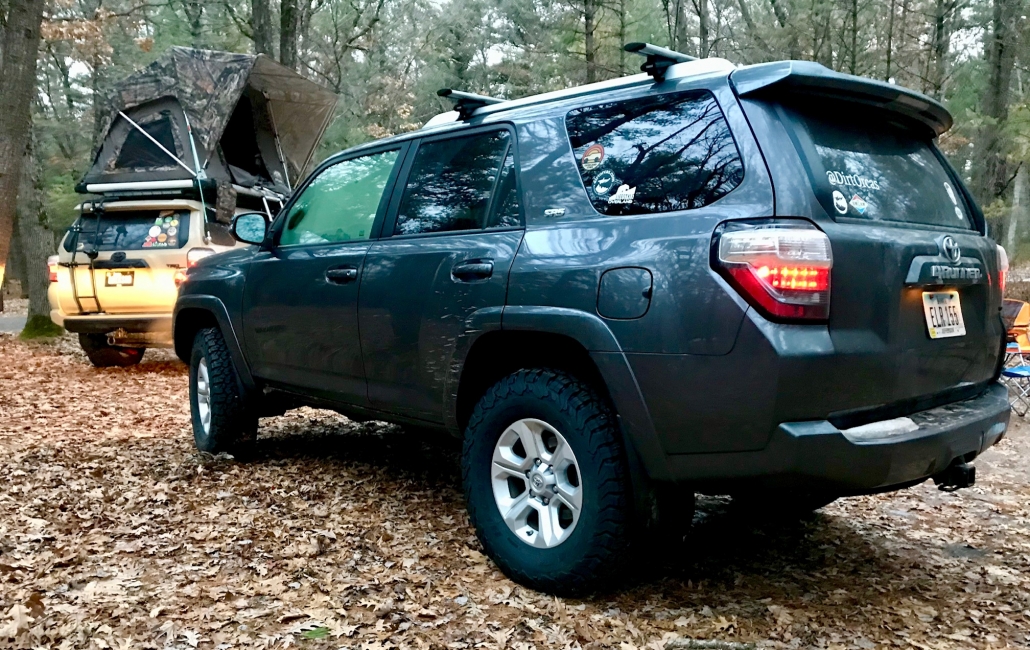 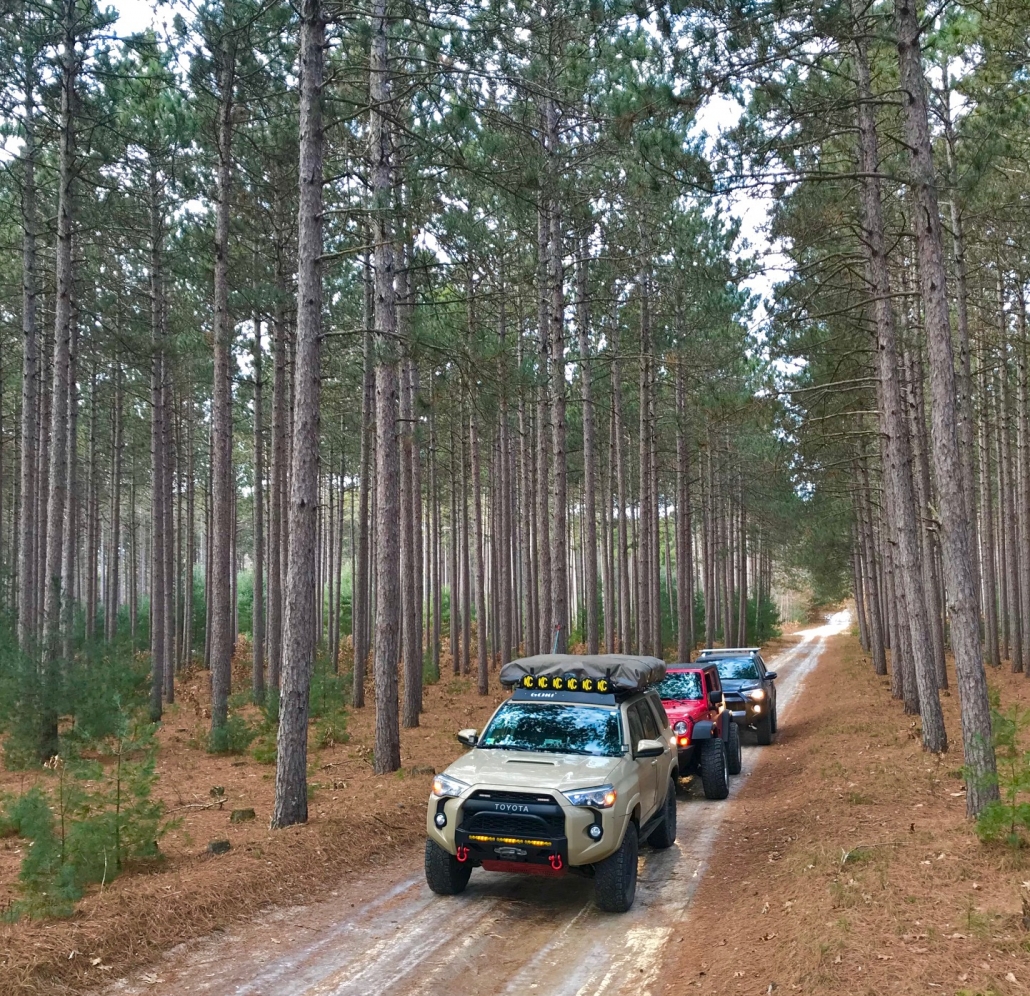 We were joined in the morning by Joe and Samantha from @seven_slot_overland in their Jeep Wrangler. Joe had built a platform bed over some storage compartments in the back of his Jeep that connected to a stand up vehicle tent for additional space. They also used a Mr. Buddy Heater to create a warmer environment inside the tent and rear cab at night.

We all made our way up the trail towards Clam Lake. Stopping for lunch at The Thorpedo. We arrived in Clam Lake to slightly warmer temps but after dark. One of the things to take into consideration when running the Trans Wisconsin Adventure Trail in January is how much less light you have to travel. Your days on the trail are really truncated by the lack of light. Sunset was typically around 5pm but with overcast skies it was typically very dark by 5:15pm. Running the trail in the summer will often leave you with daylight past 10pm. So, rather than stand around the camp in the dark for 5 hours, we decided to grab diner and a few Spotted Cows in town at The Elkhorn. We camped at the Black Lake Campground in the National Forest that night.

The following morning we made breakfast and packed up. The trail in this area had considerably greater snow pack than the Southern portion. Which makes for a much more involved driving experience. We spent the morning on the trail before arriving in Delta for the premiere dining experience on the Trans Wisconsin. I won’t go into it too much, because many others have already sang its praises at length, but the Delta Diner is a gem. It is a must do if you are planning to run the trail.

We then hit a combination of trails and highway to get to Bayfield in the late afternoon. We were thinking to take the Ferry to Madeline Island and hike the park there, but once again were cut short by lack of light. We grabbed a couple cabins in the area after learning all the private campgrounds were closed and the National Park was not an option due to the government shutdown. 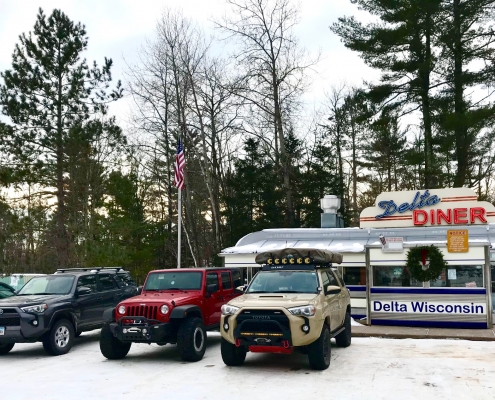 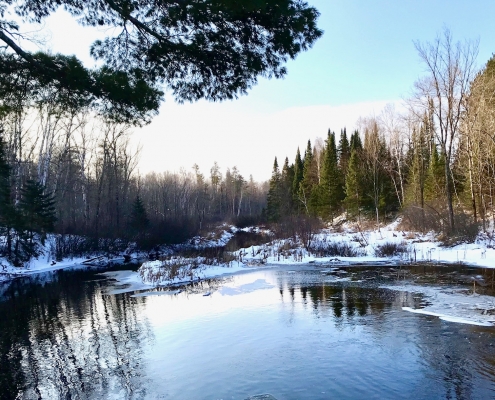 Once in Bayfield, we drank beers and traded stories with the local Captains at The Creamery before eating dinner at The Fat Radish. Finally turning in for the night at The Seagull Inn. It was nice to get a hot shower and sleep indoors after two nights our in sub 20* temps.

In the morning we grabbed liquid kick-starter at Kickapoo Coffee in Bayfield and took the Ferry over to Madeline Island. Which is part of the Apostle Islands archipelago. I opted to ride with Cullen because they charge by the vehicle and the person. Taking all three vehicles over to the island was unnecessary. Once we arrived we had a quick breakfast sandwich and started exploring the island. Taking in the real estate and pondering life on the island for the 250 year round residents. We then took a trail walk along the water from the City Park. Lake Superior giving us an offshore reminder that we were in Northern Wisconsin in January. We grabbed lunch at the Beach Club and took the Ferry back to the mainland.

From here we took the paved roads back down to Black River Falls and camped again at Castle Mound before going our separate ways in the morning.

Running this trail with a group is the way to do it. The camaraderie of the people and the vehicles add energy to the trip. The scenery is fantastic any time of year, but the winter offers a solitude the other seasons cannot. The camping options are plentiful and most are completely vacant in the off-season. The Northwoods are a pleasant change of pace for many Midwesterner’s who are tired of the agricultural grid of the plains.

I am already looking forward to running the Trans Wisconsin Adventure Trail again. 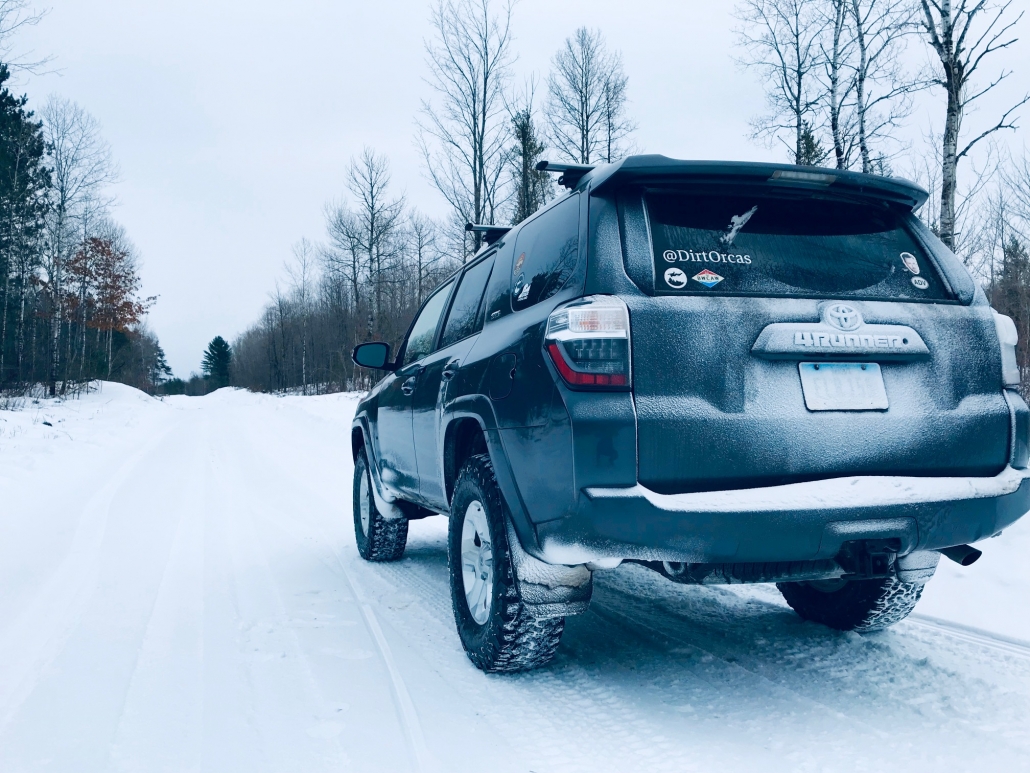