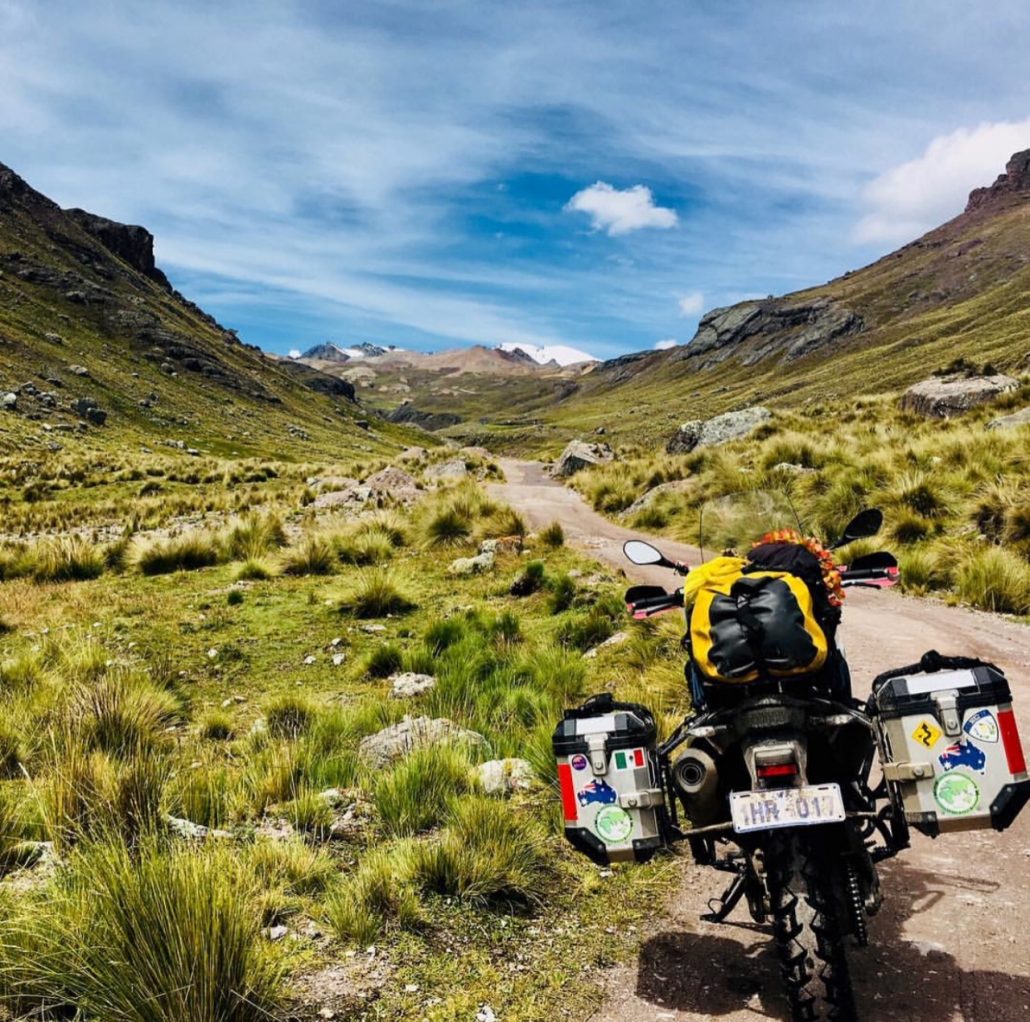 For the ninety third installment in our ongoing interview series here at Dirt Orca’s, we are very pleased to share the adventures of Neake & Paul, or as you may know them, @2bikes_1dream.

Neake and Paul are an Aussie couple with a penchant for adventure, travel, motorcycles, and fun. It’s no surprise this lead them to extensively travel on a pair of BMW adventure bikes. They have been on the road well over two years at this point and are showing no signs of shifting into neutral. They have ridden in North, Central, and South America.

I highly recommend giving them a follow to help show your support for them. They are excellent reminders that your adventure awaits.

Check out the interview below and enjoy their photography. 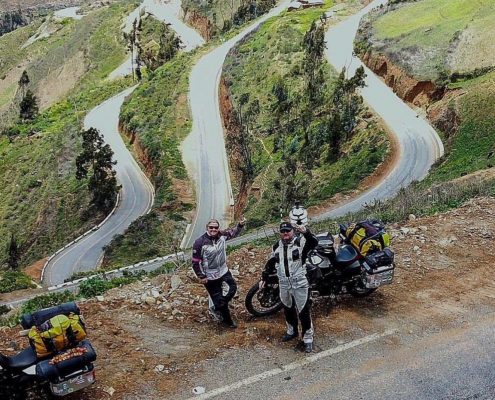 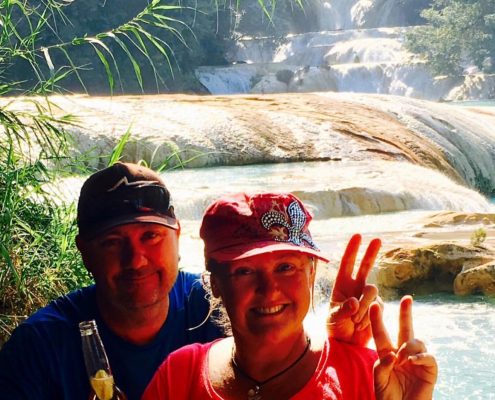 What do you do for work?

Travelling the world, some days it’s like a full-time job!

We’ve worked hard enough over our working career to have a sustainable invested income which provides for us to travel indefinitely.

Paul rides a 2015, BMW, F800GSA called Christine which was named after the car from the movie, mainly because she has a mind of her own some days.

Neake rides a 2015, BMW, F700GS called Pearl, which has been lowered to suite her short stature. Neake’s bike is named Pearl for 2 reasons, 1 because it’s white and 2 because that was her late Grandmothers name. Being so low the bike does tend to drag her arse over speed humps, but it has been a good bike to date.

What other vehicles did you consider for your travels and what made you ultimately pull the trigger on the ones you bought?

Motorcycles have always been our preferred method of transport when it comes to overlanding. Paul has ridden motorcycles since he was a young stud and when we decided to do more adventure riding, a BMW, 1200GSA turned up in the garage. It didn’t take too long to work out that the bike was too big and heavy for what we wanted to do. The 1200 was replaced with a BMW, F800GSA and from the first ride he discovered it was lighter more maneuverable and handled the dirt better than the 1200.

Neake’s first adventure bike was the BMW, F650GS, which we lowered by replacing the rear suspension with an aftermarket shock. Unfortunately, after our first serious off-road adventure in the North West of Western Australia the replacement shock failed, spewing hydraulic fluid everywhere, leaving her with a 1,700km ride home on a shock with no dampening. With the realisation that the aftermarket shock had changed the geometry of the bike and wasn’t going to be that reliable down the track, the decision was made to change to the factory lowered F700GS. At least we knew the geometry of the bike was going to be correct and hopefully the suspension was going to be more reliable.

The F800GSA has a replacement adjustable windshield, this solved the problem of wind turbulence which was hitting Paul right in the middle of his forehead. It also has handlebar risers, Pivot pegs, front crash bars, larger/stronger luggage rack, GPS, phone and satellite tracker mounted on the screen which are all charged off the aux power of the bike.

The F700GS has an aftermarket screen, front crash bars (which have been used, abused and tested!), a phone holder on the handle bars and a larger/stronger luggage rack and a selection of souvenirs tied to the handle bars which have been collected over the last 2.5 years of travel; each one holding a special memory of a person or place.

We recently changed from hard to soft luggage and we both believe that this was a great decision. Instead of going into a long-winded Pro’s and Con’s list and our reasons why the change was good for us, have a look at our 2 Bikes 1 Dream Facebook page where you can read the article about the change. 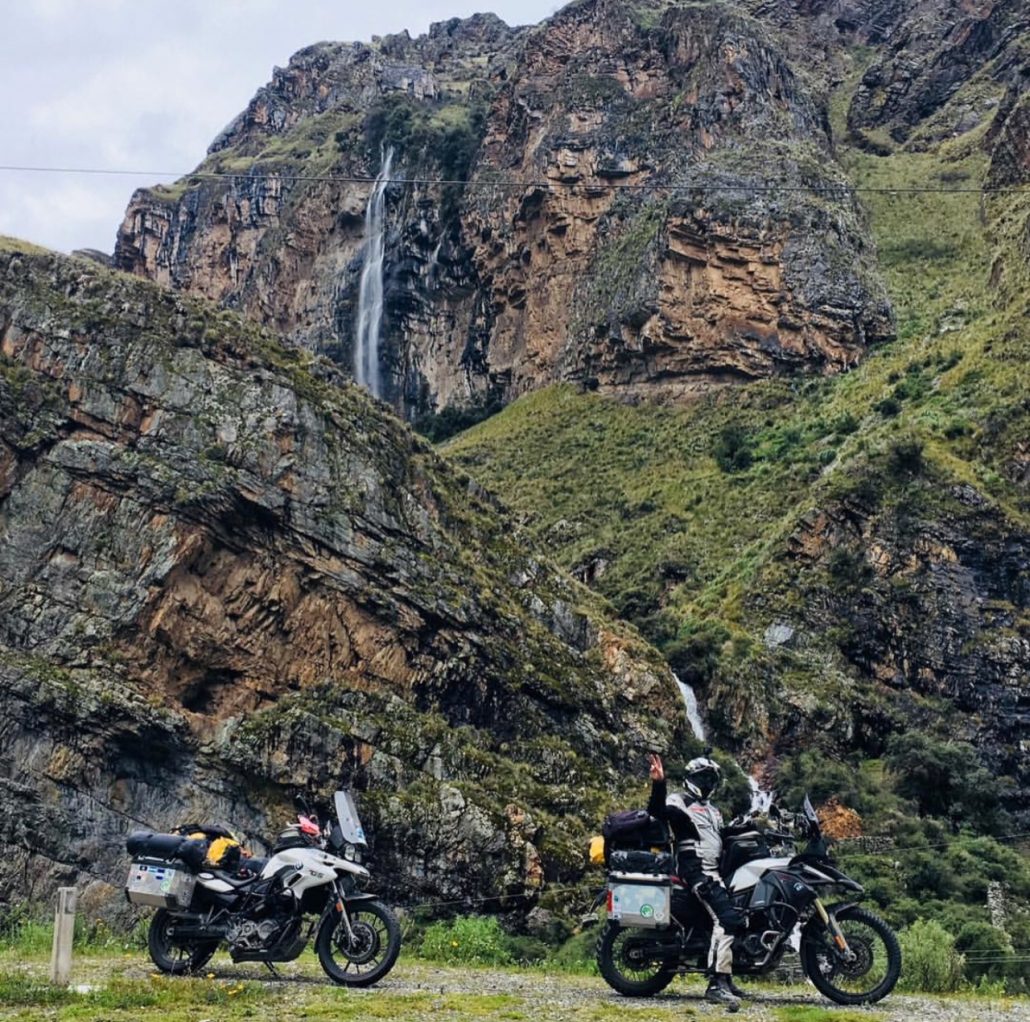 What is your favorite part about it living/working off your motorcycle?

We don’t really do much working nowadays, it’s more like checking finances and making sure everything is still going OK.

As for living off the motorcycle, we guess it’s the simplicity, the scenery and more importantly the people we meet along the way. Living off a motorcycle on a long-term basis will change your ideals and the way you see the world.

I’m not sure we have a least favourite part.

Sometimes we miss being able to have a lazy day sitting on the lounge in our undies watching TV but, on the upside, when that lazy day beckons, we look for a beach to lay on.

Every now and then we get a care package of Vegemite, which goes a long way. PS: any Aussies coming our way, don’t forget your fellow Aussies, a tube of Vegemite is heaven and will be happily traded for a few beers hahaha.

The F800GSA has done 70,000km and the F700GS has done 60,000km. Touch wood, the only problem we’ve had to date is a failed radiator cap and some bad fuel, hopefully now with the addition of the Guglatech Fuel Filters this will be a problem of the past.

That’s always a really hard question because what determines the best place? For riding we would have to say Peru has been the best so far because of the scale of the landscape and the single-track roads which weave their way through the mountains; for getting down and dirty it has to be Bolivia.

Of course not. On the top of the list is Mexico, the people, the culture and more importantly, the food. We spent 6 months in Mexico and it’s always in our heart and not out of our system yet.

It would have to be the 120 in Peru. It took us 8 hours to do 119km, reaching an altitude of 4,700 meters (15,420 feet). The scenery was stunning and Mother Nature threw everything at us, sunshine, rain, hail and snow. The only problem for the day was Paul dropping his bike in a river, and let us tell you, it’s not easy getting a bike out of an ice-cold river at 4,700 meters. We had a couple of llama farmers turn up just in time, as we got the bike out of the river. 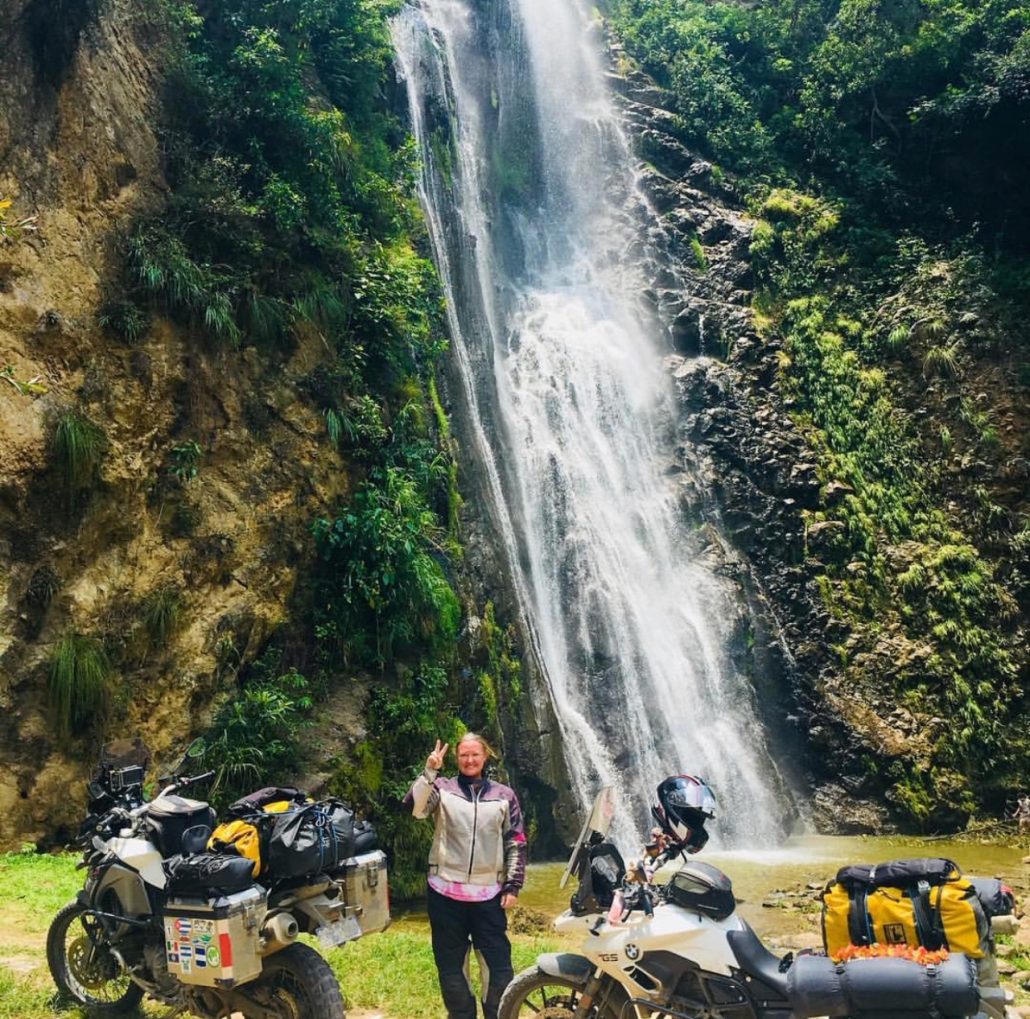 If you could give a person one piece of advice when thinking about living from a motorcycle, what would you tell them?

Pack what you think you’ll need, then cull half of it. You can’t do without spares and carry tools to repair most things; remember you can find people with specialized tools and there are shops you can buy them from and you’ll be surprised at what little personal items you actually need.

Correct! We’ve been lucky to have the finances and time to embrace the countries we visit. Money, time and commitments govern how each person executes their journey. With these limitations we’ve seen people travel from one end of the Pan American to the other in a couple of months, seeing only hotels, gas stations and the road. We know not everyone can take their time and at least the people riding from one end to the other are out there doing it but one piece of advice we would give people, would be to slow down and do the trip in segments, North America, Central America, South America, Africa, Europe, Asia and Australia. Don’t just ride rip, shit and bust, immerse yourself in the culture, the people and the landscape.

It was after about 18 months. We noticed that when we were around tourists and listened to their stories (even though their stories were exciting for them), their stories were everyday occurrences for us. I know that sounds bad but having the freedom of our own motorcycles we get to see isolated locations that are if not more spectacular than the touristy / famous ones. It’s not often that we share this feeling because it’s different being an overlander than a tourist and it is a different feeling knowing our journey is ongoing and not over in a short period. 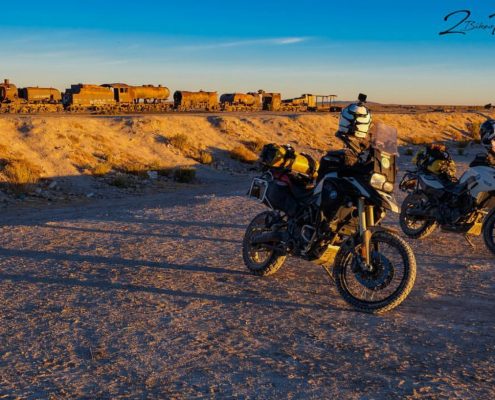 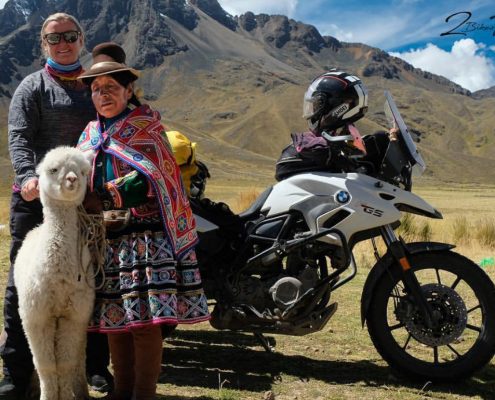 I think being Aussies we are already pretty laid back and casual. Our families have taught us patience, tolerance and acceptance; these traits go a long way in life in general not just when travelling.

The leap of faith was one of the hardest things for us to take. You’re effectively leaving behind all your securities that you’ve built up over the years and you’re heading into the unknown. Our advice; be covered financially and if you have been wanting to do it, take the leap and do it. Don’t over think it!

We’ll probably spend the next 12 to 18 months exploring South America. Then the hard decision, where to next? At this point it’ll probably be Africa.

As for the next career move, we guess when we’ve finished adventure riding, it’ll be laying on a Thailand beach sucking down cocktails. 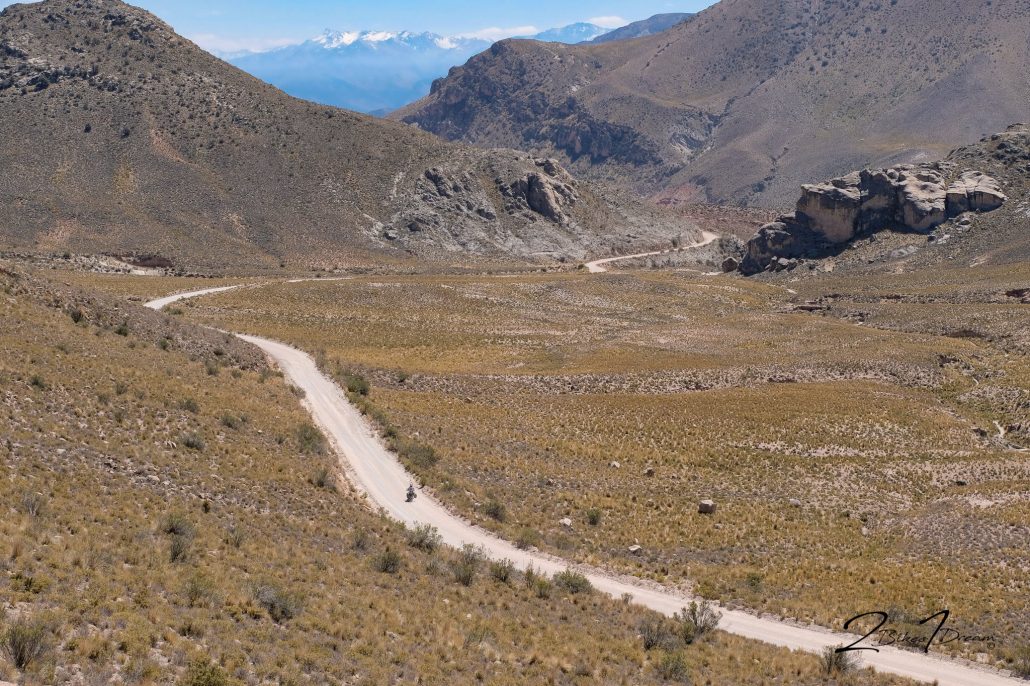