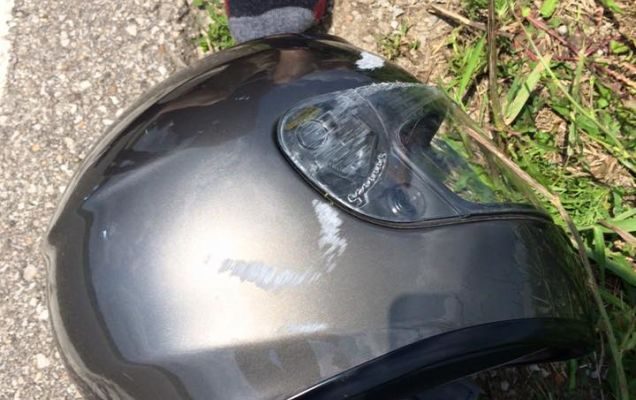 Two weeks ago I went for an afternoon ride with two of my best friends. The concept was simple. We would take a ride to a scenic place and spend a few hours on the bikes exploring.

This particular day, we were heading for milkshakes in Keosauqua, IA. A town about 30 miles South of my home. They have a great little malt shop right on the Des Moines River.

I had arranged to have everybody meet at my house. It was a hot day. Both of my friends were running a bit late. Fortunately for me, their tardiness made me change my mind about wearing jeans on the ride and I went back inside and switched into my motorcycle pants. Originally, I had opted for jeans out of laziness. The change to the motorcycle pants proved to be a wise one.

Soon they arrived and we headed out. After about 15 miles, I found myself in the lead position. My friend Canaan, just behind, in formation. Canaan was dressed in his usual motorcycling uniform – A full face helmet and little else. Despite all our efforts he opts to steer clear of proper bike attire. My other friend David had fallen back to adjust his helmet. We were moving along at about 60mph. There were no other cars or bikes on the road. It was about 2PM.

I was taking in the sights and sounds of the Red Hot Chili Peppers when a deer appears to my left. We are on a collision coarse. I immediately break, but there is little time to react. It happens so fast.

The BMW’s ABS work their magic as I squeeze the front break hard. For a split second the deer breaks to its left and I think I may just miss him. Wishful thinking. He breaks back right and I hit him dead center. The impact is shocking and extremely jarring. I slow down 15 mph in an instant.

The moment of an accident is an incredible mix of time slowing down, the awareness of thoughts in your mind, and your bodies reaction to the event. In my case, I saw the deer and was thinking, “I’m going to hit that deer.” Followed by a half second thought of “bound to happen sometime I guess”. Followed by the instant where I thought I might miss it and hope washing over me. Not so lucky. The next thought is “nope” and then total shock from the impact. Oddly, despite everything that was happening I was also thinking about how I had never hit a deer before and I couldn’t believe that it had just happened. All this with a deer draped over the front of my bike.

I did not initially go down. The deer’s head wrapped around the right side and collided with my thigh. It’s rear end wrapped around my left side and I found out later, evacuated his bowels all over me and the bike. For a brief moment, I thought I might just keep riding and be able to slow down and stop because I had kept the bike upright through the initial impact and was still going down the road. “Not sooo bad” I thought.

Again, not so lucky. Gravity took over and the deer fell in front of the wheel and forced the tire to the side, dragging the bike and me to the ground. The bike first fell to the right side as I fell to the back; sliding on my right elbow and butt. I estimate I was going about 35mph at this point. The bike then flipped to the left side and slide away down the road. The deer slide away to the right. I saw the bike shooting sparks as it skipped along the road. The deer still sliding as well. I started to roll and hit my head on the ground. I lost site of the bike and the deer briefly, but when I came to a stop, I saw the bike slide about 100ft and the deer limping across of the street. It didn’t make it far.

The road we are on has no shoulder. The grass and bushes in the ditch are all overgrown. I only saw the deer once he was in the street headed right at me. With proper road maintenance I would have seen him from a distance great enough to fully stop.

After I rolled to a stop, my first thought was “get out of the street”. Having been in a previous motorcycle accident 8 years ago, I can say this happens with regularity. There is an autopilot of sorts that reminds you that you are still in potential danger. I dragged myself to the roadside and sat up on the edge of the ditch. I saw Canaan running towards me after parking his bike. I gave him a thumbs up to let him know I was going to be OK. My next thought was turn off the music in my helmet. Music that I normally love, was extremely unwelcome at this moment. I struggled to make my hands work properly. They were shaking badly from the shock. I managed to remove my helmet and turn off the music. The deer lay still on the other side of the street. It was still alive but didn’t last long.

About this time, David arrived on the scene. He was the one who had pulled over a while back to adjust his helmet. He came over the hill and saw me on the roadside, my bike on its side, the deer on the edge of the road, and Canaan standing over me. He must have left a 50 ft skid mark trying to stop. David borrowed my knife to put the deer down, but it was dead before he got back to it.

As I was sitting there assessing my body and mind I was feeling pretty good. The adrenaline coursing through me. They told me I was as white as a ghost. I was feeling dazed but mostly OK. A woman, who happened to work at the hospital, stopped to check on me. She offered me a ride but when they tried to get me in the car, my legs gave out and they called the ambulance. I was transported to the ER and given CT scans on my head and neck. I was released and told I was OK but I would be sore.

My injuries are mostly related to the whiplash that occurred from the initial impact and the fall to the ground. I thought a 500lbs bike and a 200lbs man going 50 mph hitting a 150lbs deer would be a lot less jarring than in reality. I am still astonished at how solid the impact was. Bent the 1200gs forks about an inch.

A lot of people have told me that I am very lucky. I tend to feel pretty unlucky. Who hits a deer at 2PM? I am lucky that choose to wear all the proper gear that day? Yes but I bought the gear to wear it. The gear is designed to do exactly what it did – minimize the damage of a motorcycle accident. Sure, it could have been worse, but I like to think my injuries are exactly what I deserved. Bringing luck into it seems like a way for people to communicate their feelings about you being OK. A generic way to say they are glad you are not hurt. Still it feels odd to me.

Was I lucky to not have sustained worse injuries? Probably not. My injuries were consistent with the durability of my body, my gear, and the nature of the accident. Maybe they are saying that I am lucky the accident wasn’t worse. Like hitting a truck or something. But if that is what they mean, why stop there? We are all lucky to be alive every day. Why waste that being afraid of how much worse things could be? Deal with what is and we will be a lot better off.