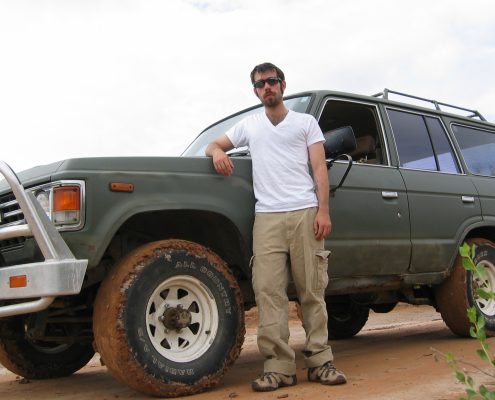 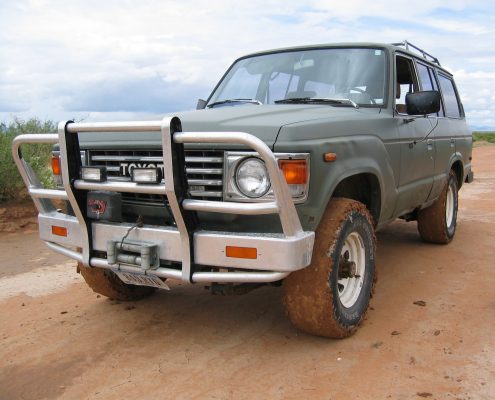 For the tenth installment in the ongoing interview series here at Dirt Orcas, we are pleased to speak with Eric Johnson.

I have known Eric a long time. We first met when I was about 12 years old. As kids, it was clear Eric was a problem solver. He is smart and likes to work things out.

Now in his mid thirties, Eric is still looking for problems to solve. When one person might look at a situation and say, that looks like trouble, Eric gets excited about the possibility of solving it. Often this ends in a satisfying solution. Sometimes, this leads to trouble.

We spoke about one of his past adventurous pursuits and how, even after you start off with a well intentioned plan, things can quickly go haywire.

Still, this didn’t deter his quest for the road less traveled. In fact, I liked hearing about how he evaluates the challenges in hindsight.

Eric is a terrific reminder that the pursuit of your dreams will have delays along the way, but like any defined adventure, you work through the delays and keep going. This is the real adventure after all.

You can also read about one of our motorcycle adventures together here. 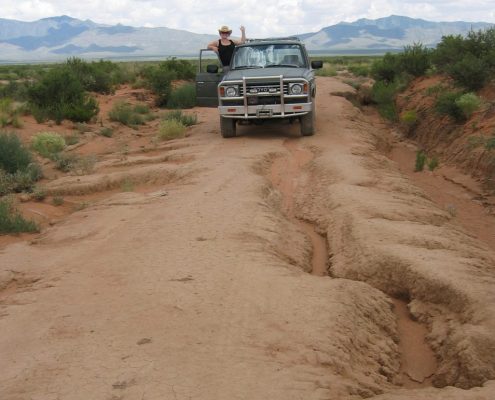 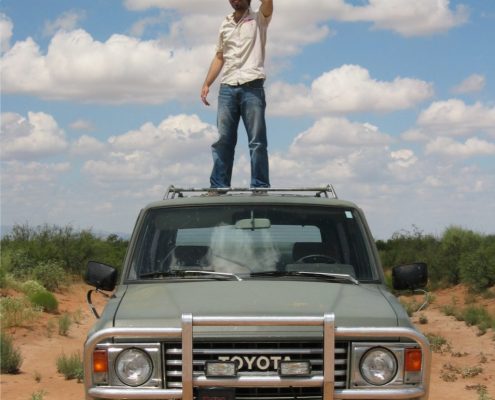 Did you name your vehicle? What do you call it?

Around 2005 my girlfriend and I returned to the states after teaching English in Taiwan. We settled in San Francisco, which was great, but our wanderlust made us want to get back on the road.

I started looking for a 4×4 with a diesel engine and serious expedition credentials. I wanted to run biodiesel and I hoped to buy something we could round-the-world with. After I narrowed down what I wanted, I started looking for Land Cruisers online. I found one on eBay in Victoria Island, Canada. Up until that moment I had never bought a car sight unseen or over the Internet or in a foreign country, and I’d never imported anything in my life. There are probably lessons there, somewhere…

So I plunked down my deposit and flew to Vancouver.

At first, I looked at the International Scout and Scout II, which were available with diesels. Their reputation for unreliability put me off.

I also looked into Land Rovers, particularly the Defender 90, but the cost was too high for me.

And I looked at other Land Cruiser models. The 70 series would have been perfect, but there seemed to be no path to import and register one legally. I looked at the 40 series, but decided I needed something larger and more modern. I considered swapping a diesel into an 80 series, but knew a project that ambitious was beyond my skill level.

So I arrived at the 60 series by a process of elimination. Since I wanted a diesel I picked the BJ60, which was never made in the US, rather than the gas-powered FJ60, which was.

And it was great. It was spacious, comfortable, and felt rock solid. It was big enough for two people to sleep in the back. It was killer off road. It looked cool. And mine had a manual transmission and the 3B motor, which is a reliable yet anemic 3.4 liter diesel that puts out a whopping 90 horsepower. That’s not a typo! The 3B will take you around the world happily burning any garbage fuel, but at a tortoise’s pace.

Have you made any upgrades or changes?

I didn’t need to mod the truck much since it was already built up as a trail rig. ARB air lockers front and rear. On board compressor. Warn 9000 winch. Dual batteries. Bulbar front bumper. Kaymar steel rear bumper with swing out jerry can carrier and tire carrier. CB radio. Auxiliary lights.

If I’d kept it long enough, I would have added a rooftop tent and an expedition-sized fuel tank. 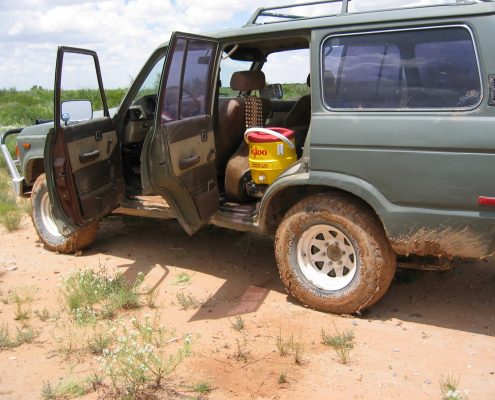 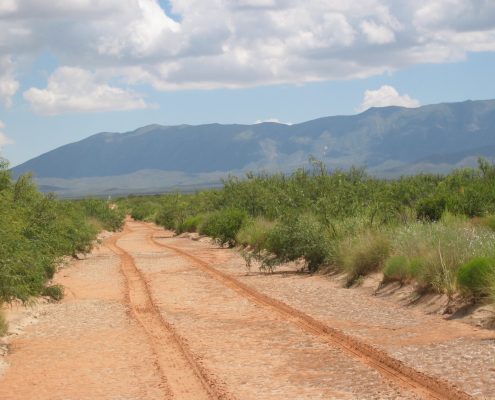 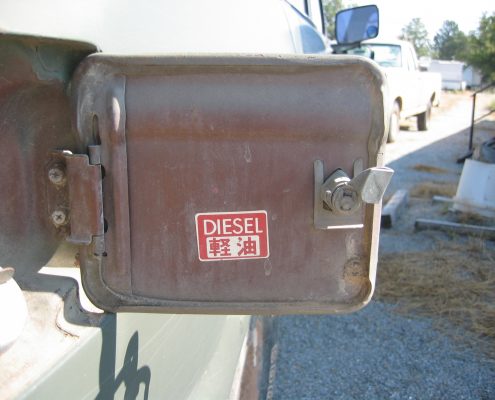 What is your favorite part about it?

Its no fucks given vibe. Yeah it was a cool vintage ride, but it wasn’t precious. It had a horrible olive drab rattle can paint job, plenty of rust, and a ton of dents. I could go anywhere and do anything and not worry about scratching the paint or whatever.

Well, it caught fire the day I bought it!

I pulled over at a gas station right over the border near Blaine, Washington to get some water and a snack. I saw smoke coming from the hood. Just a little, at first. Probably just an oil leak smoking on the hot engine, I thought. I waited. Another tendril of smoke drifted up from the other side of the hood. Uh oh. I opened the door and threw my backpack as far as I could. When I lifted the hood, I saw one of the batteries completely ablaze. The hood liner was also on fire. And a clamor of popping and whistling punctuated the whole scene as the engine burned.

I spent the next 20 minutes or so with my phone in one hand and the extinguisher in the other, blasting the engine anytime I saw anything resembling smoke. Plumes of yellow dust drifted off down the road. And people kept pulling up to get gas the entire time. That was unreal to me. I think I would’ve gone somewhere other than a gas station with a burning car.

Because I put the fire out so quickly I got away with just $300 in repairs and a great five day stay in Bellingham, Washington.

But there were plenty more problems. Dealing with deferred maintenance on a beat up 22 year old truck is tough if you don’t have a garage, tools, money, or much mechanical knowledge. Knowing that I was in over my head was the worst thing about owning it. I didn’t develop the skills to make the most of that truck until years after I sold it. 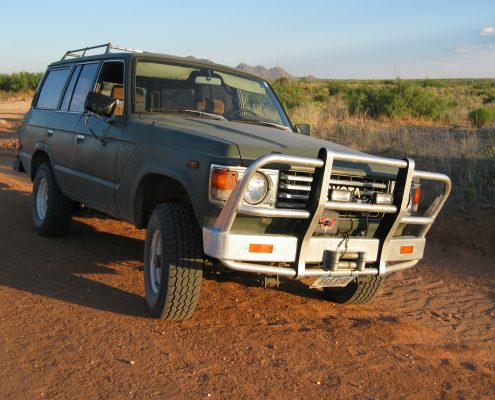 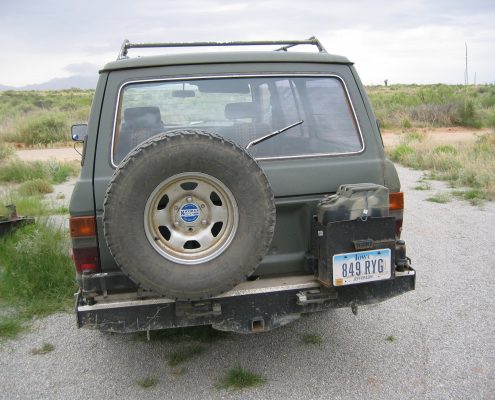 I took it to a lot of cool places on the west coast, the southwest, and the northeast. My favorite was the Jornada Experimental Range in southern New Mexico where I worked as research technician for a summer. The Jornada is around 90,000 acres. It takes over an hour to drive from one end to the other.

Favorite road you’ve driven it on?

A nameless two-track in the Jornada. The nearest paved road was probably 50 miles away. I remember one Saturday a friend and I got stuck up to the axles in wet sand with nothing solid to winch off of and no shovel. Oops. But what a place! Spectacular and remote, with a landscape straight out of a storybook.

If you have the gear and the wherewithal to camp in the backcountry for a few days on a hiking trip, adventure travel by truck will seem easy.

Planning, research, and buying gear are certainly fun and necessary – and especially so when danger or bureaucracy are involved – but there’s no substitute for sketchy roadside repairs and spontaneous seat of your pants decision making.

Just go – your stories will be better.

GIVE THE GIFT OF SEMI-RAD