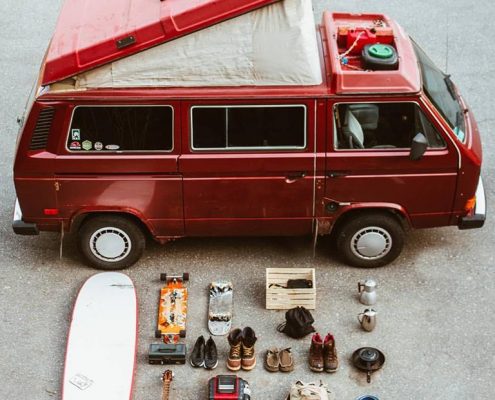 For the twenty seventh installment in our ongoing interview series here at Dirt Orcas we are pleased to speak with David Jongerden. David is a photographer and van-lifer cruising British Columbia and and basically living the dream.

I discovered David and his #vanlife travels through his fantastic Instagram page, @davejongerden.

With British Columbia as his backdrop, David travels the area working as a freelance adventure lifestyle photographer. You can view his work at his persona website www.davidjongerden.com. You can also follow his facebook page if that is more your speed. You can find his contact information for professional work by visiting any of these pages.

One thing you notice right away about David is his eye for the conditions. I personally do not have the relevant artistic vocabulary to properly explain this but what I am trying to say is that you will “feel” the air around David when you look at his shots. His photo’s clearly depict temperature.

He is a great reminder that moving towards simplicity isn’t just a lifestyle but also a way to improve your ability to focus on your craft. 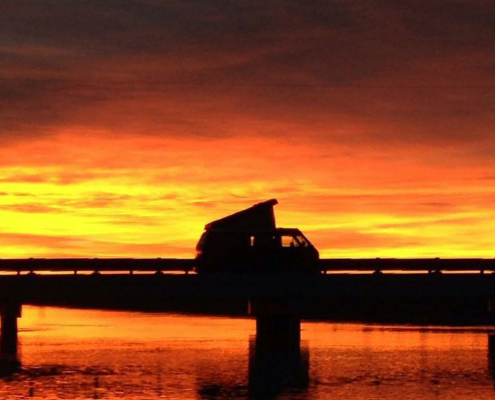 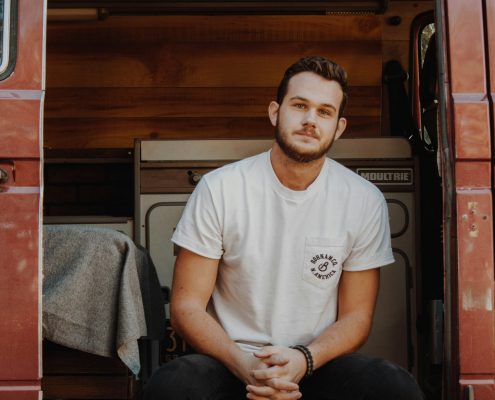 Tell me about your vehicle – Year, Make, Model?

It is a 1987 Vanagon Westfalia 2WD with a manual transmission and a 2.1L waterboxer engine.

Did you name your van? What do you call it?

I did name my van. Her name is Gina. I was camping with a friend from Germany and he said he was an expert on naming cars. I told him that was bullshit and in the two years that id owned the van, hadn’t found a name to suit it. He suggested “Gina” and it just sounded right. Also, the van, being a VW was made in Germany and seeing as how my friend was German, it felt right that He should name it. So she is named Gina.

I bought it in the summer of 2015. So I’ve had her close to two years. I purchased her from a local dealership. I was living with a friend and paying $800 a month for rent and then one day on my way to work a small trailer dealer had this VW van sitting out front. I’d always wanted one. Even as a kid I thought they were the coolest looking vans out there. I went to work but was basically useless because all I could think of was “I could live in that……..I could own one of my dream vehicles …. I wouldn’t have to throw $800 down the drain every month”. After one of the longest days of work I can remember I went straight to the lot after work and asked to test drive it. I jumped in, fell in love and the rest, as they say, is history.

What other vehicles did you consider and what made you ultimately pull the trigger on the ones you bought?

I honestly didn’t do a lot of considering at all. At the time my decision making process was that of a squirrel crossing a road. I decided to live in a van, bought Gina, and moved in all within a week. Best rash decision I’ve made in my life.

No not really. I’ve done a bunch of stuff to the interior. To make it more of a home. Wood paneling, hardwood floors, and a couple shelves is about the extent of it. Oh and LED string lights because Instagram, HaHa. The exterior is basically stock other than an 80W solar panel on the roof that keeps my batteries topped up.

To become a better photographer. That’d be a main goal. Also, a friend and I are starting a company that gives %50 of its profits to environmental programs and groups. Just working on that and trying to do our best to get it up and running. (Follow @brave.and.bold.co on Instagram to keep up with that) 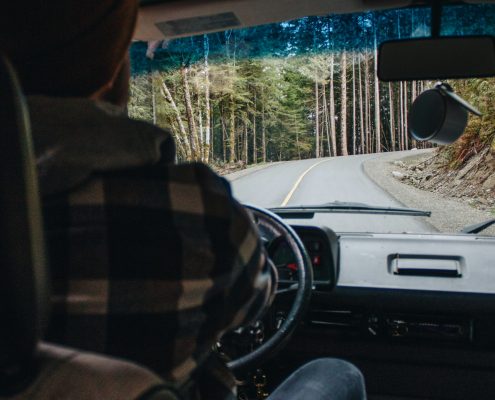 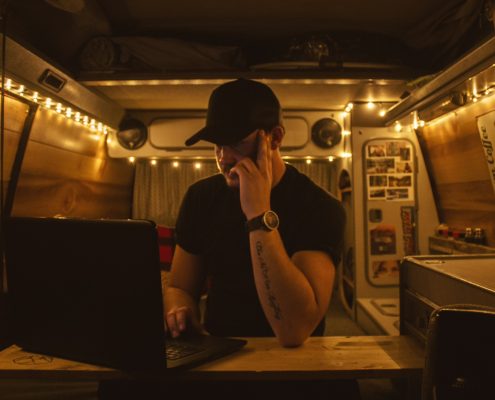 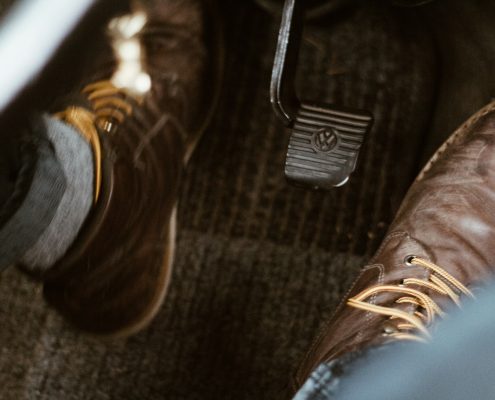 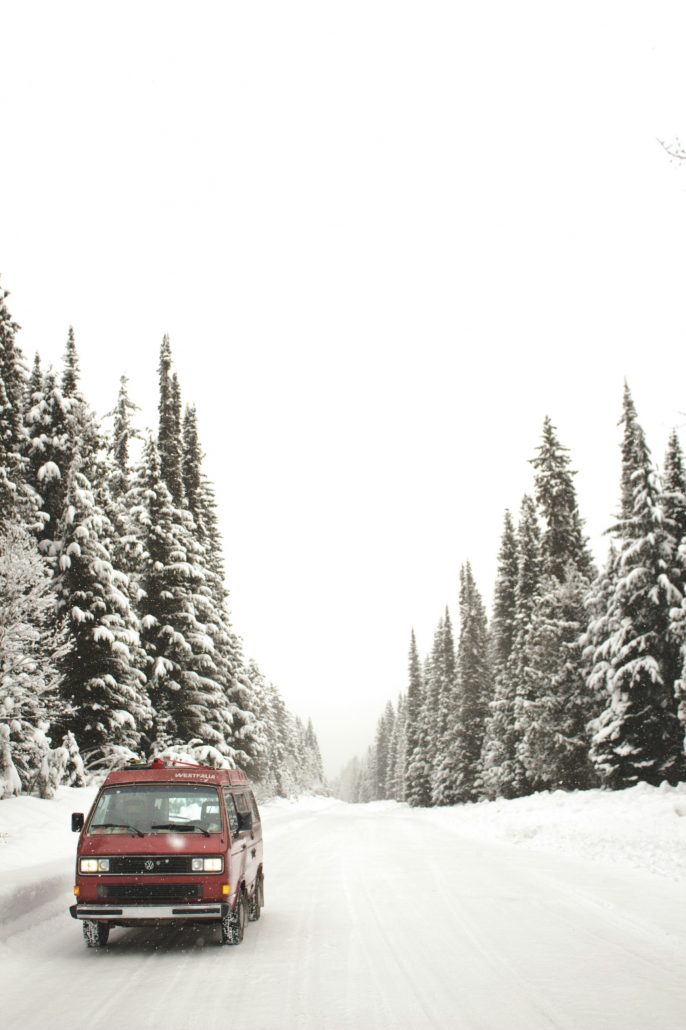 What is your favorite part about it living out of your vehicle?

Honestly there are a lot of things that I love about it. The simplicity of it is probably the biggest reason. By living out of such a small space you’re forced to get rid of everything you don’t need. Everything has its place and reason/use. Along with that comes a desire to strip down to things that have multiple uses. Like there are things we all need like a coat. But do we really need six of them? Why not do your research and buy one coat that does it all? And why does it have to be trendy? I like to dress fashionably (ish) just as much as the next person. In fact, I think dressing well is a form of good manners but we also need to think about sustainability. And one coat that works well for many uses, but maybe isn’t that trendy is sustainable. It’s good for the planet and your wallet to boot! But a coat was just one example. You can apply that mindset to a lot of things. How many people have a phone, a tablet, a computer, a TV, an Xbox, and a kindle? A lot of people. You don’t need all that. Buy a big phone with a large screen and a fast processor. It will do everything you need it to. Maybe not everything you want it to. The key word is NEED. If 6 hours of Call of Duty is what your life is about then by all means have the big TV and Xbox. But you don’t NEED it.

Sometimes it’s hard to find a place to park and you give up a lot of privacy.

Honestly haven’t done too many long trips yet. It’s stayed on Canadian soil since I got it. Around 30,000km or something like that. 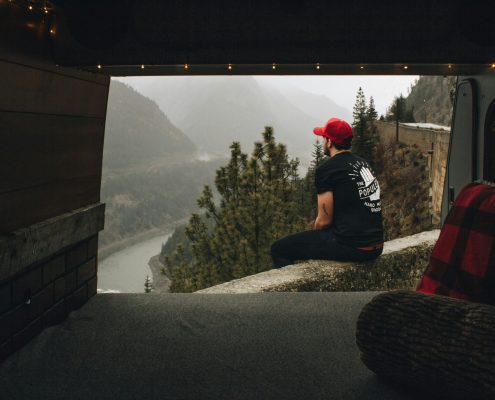 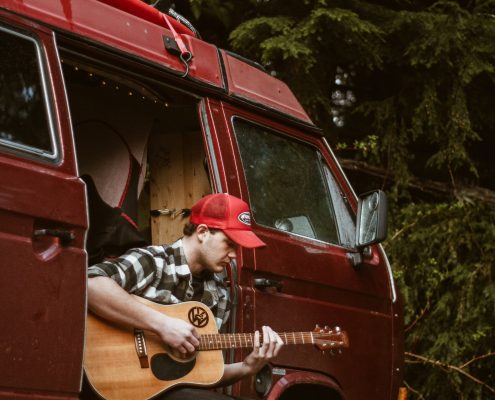 Tofino BC is definitely at the top of the list. Gina and I just fit right into the vibe there. Everyone there has a traveler’s heart. Banff National Park was also pretty epic. And there is a couple other places in the Rockies that really get me stoked.

Favourite road? Sea to Sky road BC for views but not for driving a VW van. Most Vanagon owner’s paradise would be a flat road with no turns, no wind, and downhill. Actually wind is ok as long as it’s behind you. Haha. They have next to no power. And they tend to feel like they’re going to tip over. But what they lack in power they make up in character.

If you could give a person one piece of advice when thinking about living and traveling out of a vehicle, what would you tell them?

Make your van a home (make it yours) and make it easy to stealth camp in. It will make your life so much easier.

It takes a special kind of person to recognize that the journey, not the destination, is the point of life. Travelers know this. Was there a point in your life where you became conscious that you were one of those kind of people?
I was born in the Fraser valley of British Columbia Canada. And since before I could remember my parents were taking my sisters and me camping and hiking constantly. Yet even as a small child I realized that what I loved most about those weekends was time with my family and the trip to wherever we were going. I don’t remember too much from the actual places we went to but I do remember getting there. Mom and Dad up front. A map of BC as wide as I was tall and blocking half the windshield. Holding my bladder for what seemed like an eternity because “I didn’t have to go when you asked if I had to”. I loved those trips. And I guess that love for memorable experiences never left me. 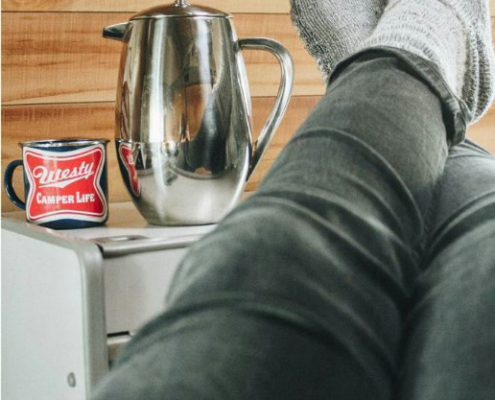 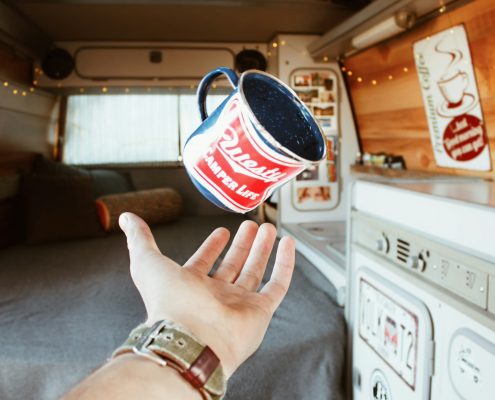 What values do you think your hometown instilled in you that you take on the road and bring to your trips?

I wouldn’t say my hometown instilled much of anything in me. I was homeschooled and we moved a lot because my parents flipped houses. My parents are the ones who instilled good manners, respect and love for all people, how to think outside conventional methods, a healthy appreciation of the earth/how to take care of it and as previously stated a love for adventure and new experiences. I’m really thankful for my family. We’re super close and the older I get the more I appreciate the rarity of that in today’s society.

Do you see yourself as someone who took a leap of faith to live in an unconventional way or do you think it kind of just happened?

I most certainly knew I was going to raise a few eyebrows and shake a few heads but it didn’t really matter. Going with the flow of a river only brings you downhill. I’ve learned that in life if you make it a point to do exactly opposite of what the crowd is doing, you’re usually better off. Not everything obviously. Like if people are running out of a burning building it’s probably in your best interest to do the same. But you get my point.

I want to do a cross Canada road trip. Vancouver Island to P.E.I. That would be epic. 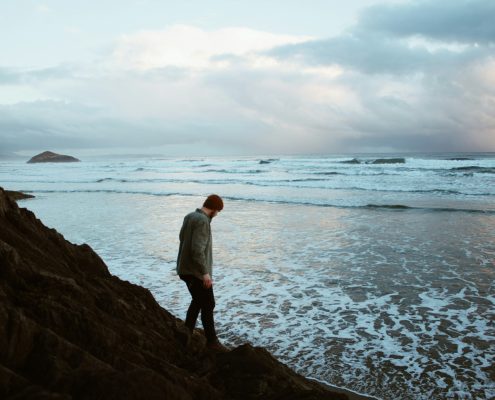 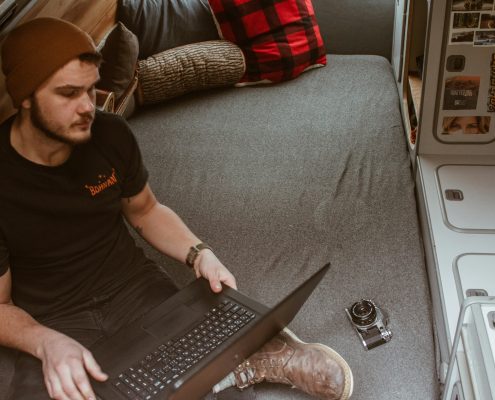 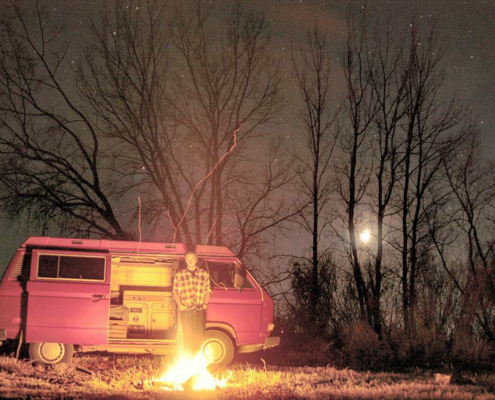