BASIL LYNCH: ON THE VALUE OF WANDERING 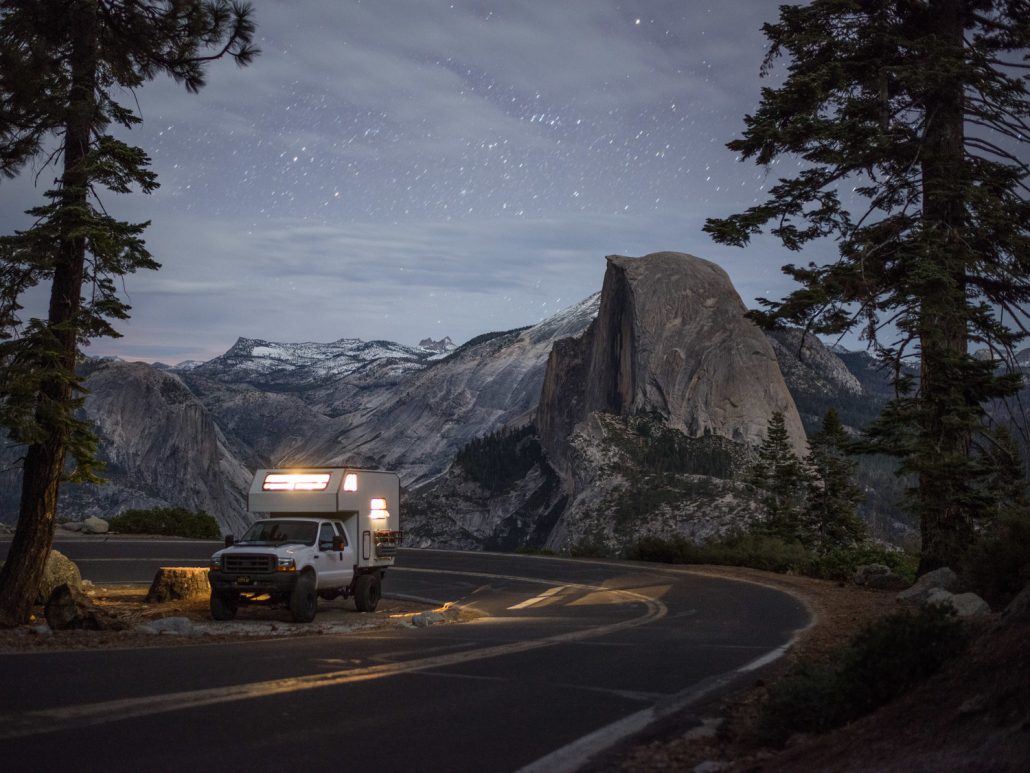 For the seventy fifth installment in our ongoing interview series here at Dirt Orca’s we are excited to speak with Basil Lynch. A roaming professional photographer and logistics manager by trade, but so much more in practice. You may know him as @basillynch

I first came across Basil on Instagram and immediately wanted to interview him for the interview series. After you read this interview, you can check out his gallery and give him a follow here. Sometimes when I come across somebody I am considering for the series, I might follow them for a bit and marinate on their gallery, just to make sure they fit the Dirt Orca’s mold. Basil was an obvious choice to include in the series. He is adventurous, thoughtful, creative, lives out of his very off-road capable truck, and genuinely seems like the kind of person with whom you’d like to share a beer and a campfire.

His personal website, www.basillynch.com, offers additional windows into his life and exploits as he makes his way around the America’s west.

His YouTube Channel is also a great addition. Once you have finished this interview, scroll back up here to check out this video from his Alaska Trip in 2016.

His landing spots and his lifestyle presentation are top shelf. As a follower of his work you will find yourself excited about his travel updates. Some days you’ll catch him fording a swollen river with Bruce. Others you’ll see him getting caught in a serious storm while beach camping and having to relocate in the middle of the night. Whatever he is up to, I think he does a great job of keeping his followers involved in a positive way.

Basil is a great reminder that a positive attitude is so essential to life. His life on the road isn’t always roses. Many bloggers or Instagramers present it their realities as otherworldly, because they only show the great moments. Basil’s presentation is raw and you will see the rust along with the polish, but because of his positive attitude it still feels as if you are part of the adventure.

Please enjoy our interview with Basil Lynch and his original photography below. 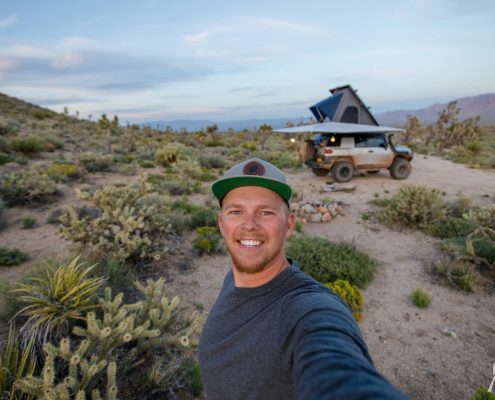 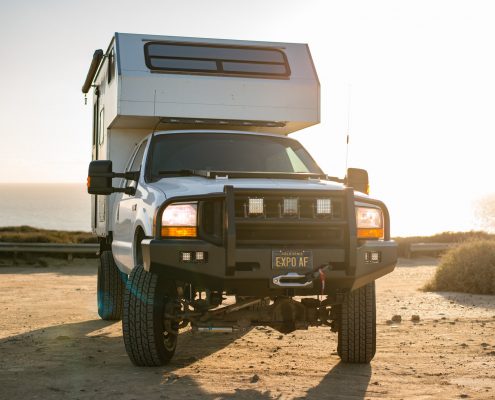 That’s a tough question, but honestly, it’s wherever my truck is. Being a freelance photographer I can really make any location my office for the day. That can vary from the top of a mountain to a coffee shop in the middle of a city. All I need to work is my camera, a computer, and a solid internet connection a few times a week.

The Truck is a 2000 Ford F250, 7.3l Diesel 4×4. With a home built camper on the back. Its name is “Bruce”. Strapped to the back of the camper I have a 1980 Yamaha DT100, it only goes about 45mph, but it’s perfect to ride into town and leave the truck at the campsite. (You can read a full description and view additional pictures of Bruce here.)

When looking for a vehicle to live full time in I seriously considered a 4×4 Sprinter van, but then I realized as a photographer I needed something unique. One of the main subjects in my photos is my vehicle, so I had to make sure it had style points. I also wanted something that had plenty of power, was very capable off-road, and was reliable, the F250 with the 7.3l diesel fit those standards perfectly. 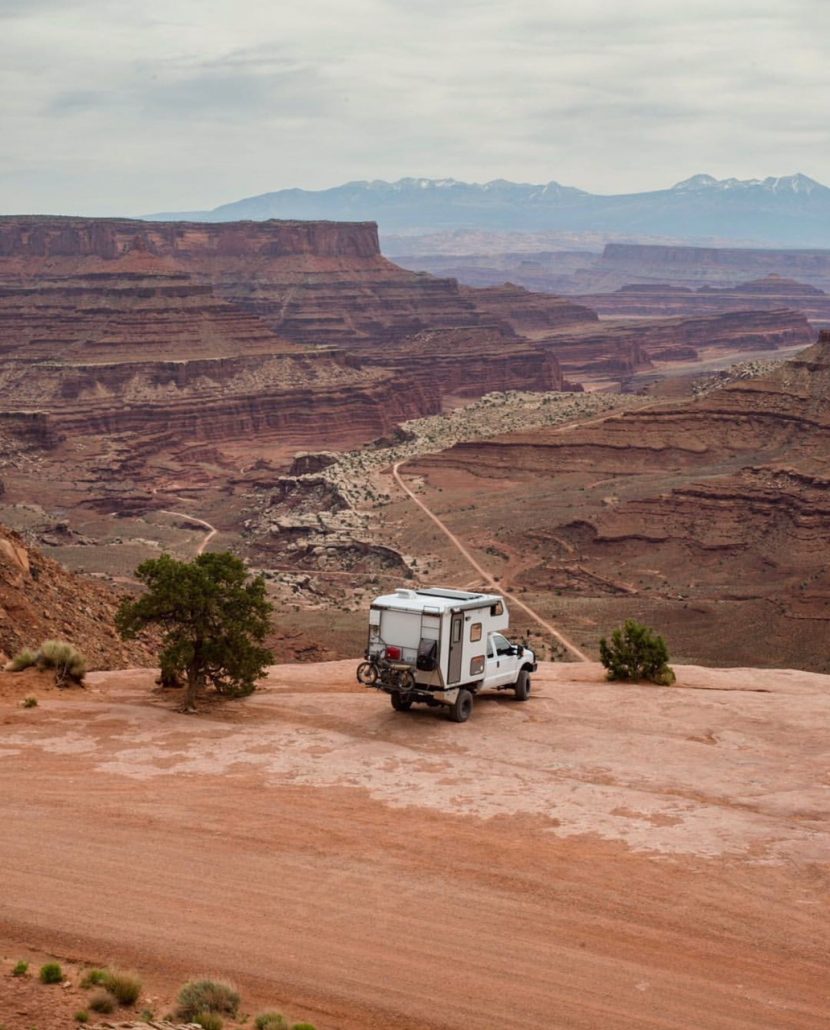 Maybe a few, hah! The truck and camper have been completely decked out with aftermarket parts. Some of the key features are a set of Yokohama Geolandar AT G015’s, Bilstein 5160 Shocks, Buckstop Truckware Bumpers, Acuva LED water purification system, and a ton of Rigid Industries LED lights.

Probably that anywhere is my home, if I find a town or campsite that I love I can stay for a week. Everything I own is in the truck, so if I want to stop for a week or two somewhere it’s easy, all I need is a parking spot. Also, not having to pay rent or a mortgage is amazing.

Honestly, there aren’t any major bad things, but sometimes finding a place to sleep in cities is tough. Also, not having a bathroom is fine 99% of the time, they are easy to find, but every once in a while it gets interesting, I’ve had to get creative hah! 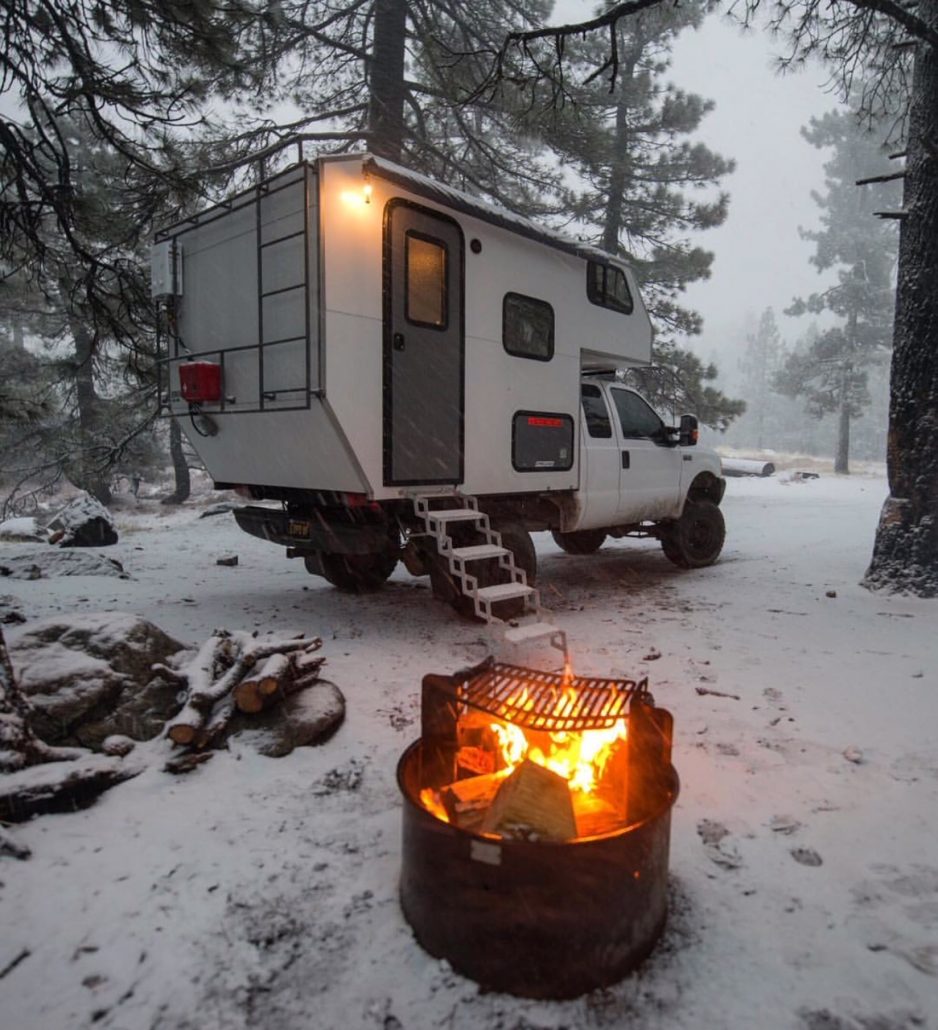 Yosemite was pretty special, but I really liked Big Sur, it’s a toss-up between those two locations. Big Sur was quiet and I was able to surf, Yosemite was breathtaking but insanely busy. If I had to go back to one, it would be Yosemite, but in the snow.

Highway 1 up the West coast was awesome. You can watch the coastline transition from the rolling hills into the dense PNW forest as you get further north. So many locations to camp and shoot photos along the way.

Don’t plan too much, I used to plan out every trip I took, making sure I missed nothing along the way and made the best out of my time. But so far on this trip, I’ve just been wandering around. This has started to apply in my life also, I try to take advantage of every opportunity that’s offered to me, and so far it’s worked out great.

Just do it, I know a ton of people that have always said “One day I’ll move into a vehicle full time” and it seems like they’ve been saying that for years. Find a vehicle, build it out, sell everything, hit the road and never look back.

It takes a special kind of person to recognize that the journey, not the destination, is the point of life. Travelers know this. Was there a point in your life where you became conscious that you were those people?

I think I realized this on my way north to Alaska, there’s so much to see between San Diego and Alaska I kept getting distracted and used up most of my time just getting there. Yes, the destination is a big part of any trip, but the things I see and people I meet along the way are most memorable part of any trip I take. 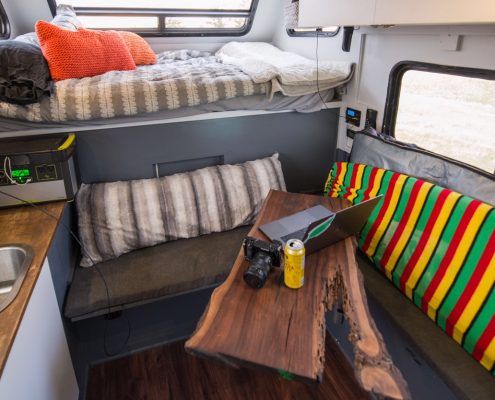 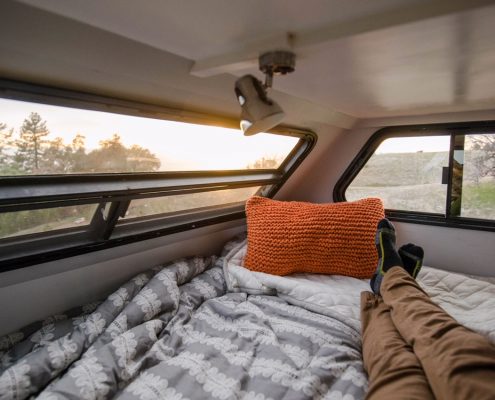 Just be nice to everyone. I’ve made friends that will last a lifetime by just saying hi to them randomly while the road. You never know who you are talking to, they might become your best friend or your next big photography client.

I took a leap of faith for sure. I didn’t have a plan, I just sold everything I owned and hit the road north. It was scary at first, but now that I’m a month into living on the road I have no regrets, it been a life changing experience and I’m not sure I’ll be able to go back to living the 9-5 life.

After I finish up the West coast I plan to start working my way East. I’ll attend Overland Expo West in Flagstaff, AZ at the end of May and from there will head towards the east coast. This fall I plan to do a trip to the Northeast, that area is so unexplored, there has to be some hidden gems. Everyone in the Overland community does the same trips, but it’s time for me to do something different and explore a new area of the country. Career-wise I plan to just keep growing my client base, along with my social media channels. Currently, I am funding my trip with about half

The video below is a walk-through of Basil’s F250 Camper that is part of Dylan Magaster’s YouTube series.

WEDNESDAY WANDERLUST: BRAAP TO THE GAP!!
Scroll to top