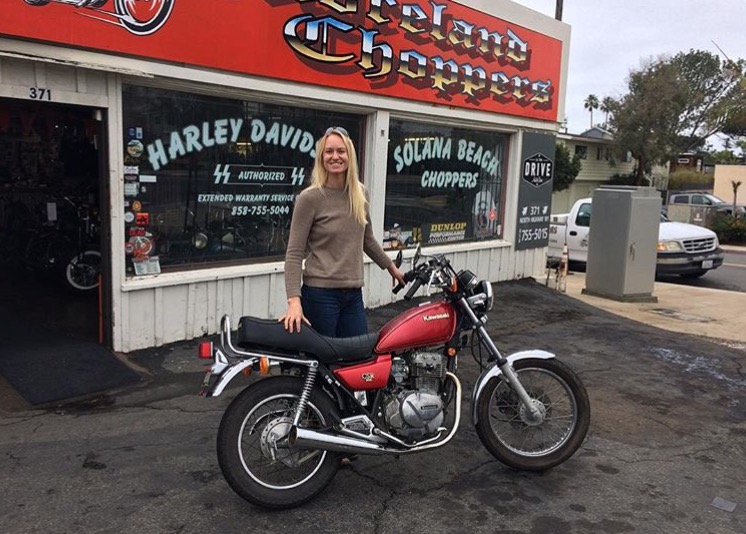 End of the road

For the nineteenth installment of our ongoing interview series here at Dirt Orcas we are thrilled to speak with Anna Anderson. A thoughtful soul and fellow Iowan, Anna is an keen observer and an adventurous traveler of many kinds of transport. She is the kind who makes you want to grab a cup of coffee or a beer with her and listen to her stories.

I became aware of Anna when her brother Ethan contacted me about Dirt Orcas. He was excited to learn about other Mid-Westerners who are interested in overland travel and adventure motorcycling. After a quick Instagram search, I found Anna’s feed, which you can view here, and was immediately struck by the honesty of her photos.

She also operates a blog called The Attic at Anderwood. Anna’s writing has a tangible feeling of wholesomeness to it; Appreciating the subtle and small but celebrating their greatness just the same. Within her blog you’ll find insights on “How to make a bad day better” and anecdotes from her travels. Anna is relatively new to motorcycling and that is a great place to catch up with somebodies journey.

Whether she is enjoying a homemade pie on a perfect Iowan summer night or riding a motorcycle down the highway she gives you the sense that, whatever she is doing at the moment, is the perfect thing to be doing.

Anna is a terrific reminder that life is best lived if you are pushing yourself to seek new experiences. 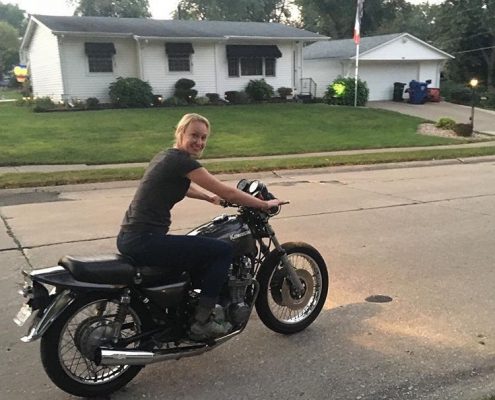 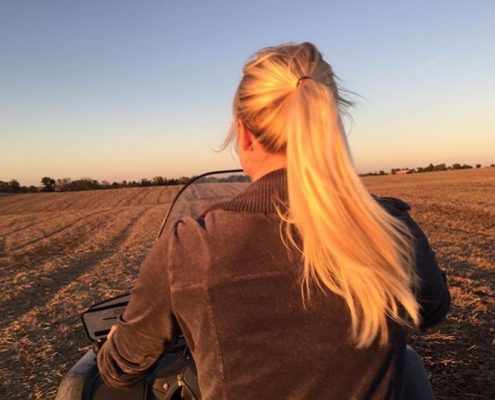 The original goal was to reach the end of South America by motorcycle, simply because I wanted to take a long motorcycle trip and not have to ship the bike anywhere along the way (Darian Gap notwithstanding). I left the bike in San Diego and headed into Mexico by bus (and Uber, which is kind of a funny story). If the bike sells, I’ll pick up another, more adventure-appropriate bike along the way.

Year, Make, Model of your bike?

Did you name your bike? What do you call it?

I got it in October 2016, seven months after I got my license, and after logging approximately 50 miles of road time on one of my brothers’ bikes. I got it from Tony Leuck, a mechanic in Northern Iowa, which by the way, is one of the most beautiful places on earth. I’d test ridden a KZ900 project bike and really loved it so I knew I had to see this one. It wasn’t an immediate “yes,” but it seemed like a good idea to start on a smaller bike. When I test rode it the second time it ran out of fuel. I’d left my phone in the car so I had to flag someone down and ask to use their phone. It was a little prescient because on this trip I ended up spending a lot of time trying to figure out why the bike wouldn’t start and ultimately depending on the kindness of strangers to get out of tricky situations. Thankfully never on the side of the road. I always managed to get to a gas station, which was a little strange actually. In California someone suggested I take a more reliable bike and “a small SWAT team” into Mexico, and I wondered if I already had a small SWAT team of some kind alongside me. (Mexico has been really wonderful so far, by the way.)

What other bikes did you consider and what made you ultimately pull the trigger on the ones you bought?

The KLR650 was the only other one I seriously considered. I test rode one that was perfectly outfitted for this trip, but it would have taken a considerable part of my trip budget to get it. My thought was: less on the bike; farther on the road. The reality was more like: less on the bike; more money spent fixing it and a lot of time spent getting not very far at all.

Have you made any upgrades or changes to your bike?

Along the way I had a mechanic add in a toggle switch to bypass the starter because of a short in the starter. It was a quick fix to get back on the road and ultimately led to burning out an ignition coil. It reinforced my theory that toggle switches are the beginning of the end. 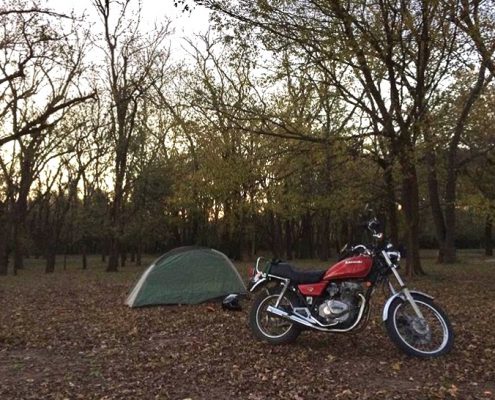 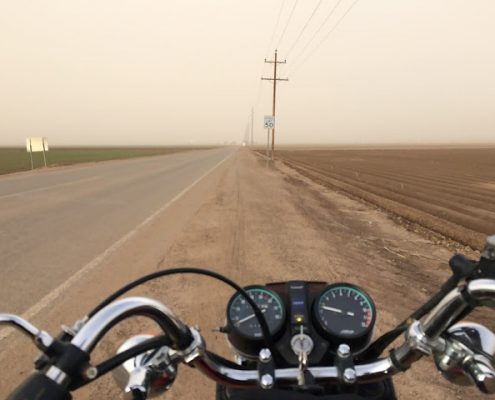 Right now I’m catching buses, but what I love (and miss) about living off the bike is being self-contained and having everything I need right behind me, strapped to the bike. It’s an incredible feeling, speeding down the road with a tent and a few necessities, going anywhere I wanted to go in the direction of “South.” Also, the goal of riding a motorcycle to the end of a continent takes “wandering” to a worthy level.

My setup was really time consuming to take on and off the bike. I had a duffel (later two) strapped on with tie-down straps, and a fairly complicated rigging system. Also, it would take me at least a half hour every time I stopped, just adjusting all of my gear, and since I stopped for fuel every 50-100 miles I was stopping a lot. It took forever to get anywhere in a day.

Three thousand. Which I’m pretty happy with considering it was my first bike. I’d ridden only about 50 miles prior to this trip, and all of that was on back roads with very little traffic. I was terrified to ride through the nearest busy intersection, so once I did that, on my way out of town on the first day of the trip, I thought, “OK, the rest will be fine.”

From the Mississippi River on the Eastern edge of Iowa to the Pacific Ocean in Encinitas, California. Along the way? I rode through Palo Duro Canyon in Texas, which was a thrill for first-time twists and turns.

A little stretch of road on the way into Guthrie, OK, which all of the sudden turns into swooping, tree-canopied curves. 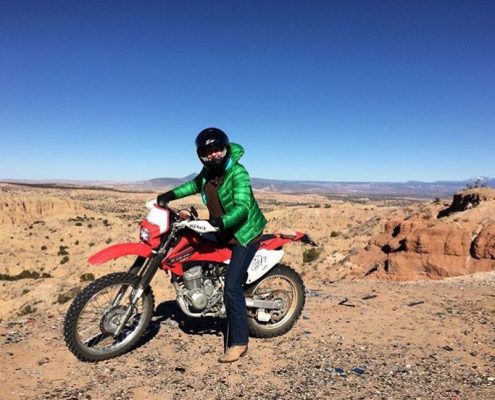 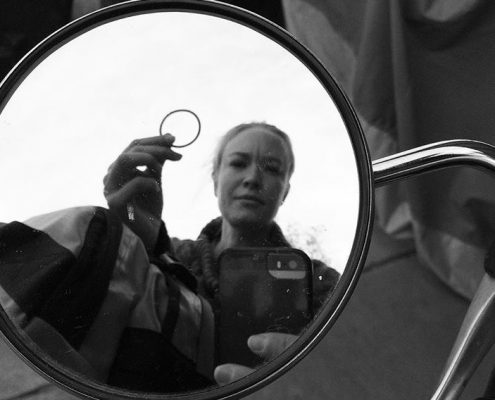 If you could give a person one piece of advice when thinking about living and traveling off of a bike, what would you tell them?

Do it. So many people I pulled up next to at gas stations told me they wanted to do the same trip. I’d done a ton of research, but was flying by the seat of my pants, basically. You’ll plan and prepare, but things are going to happen that you could not have known to plan or prepare for. There’s a lot you’re just going to have to figure out along the way, and as everyone knows, that’s when things get interesting.

It takes a special kind of person to recognize that the journey, not the destination, is the point of life. Travelers know this. Was there a point in your life where you became conscious that you were one of those kind of people? 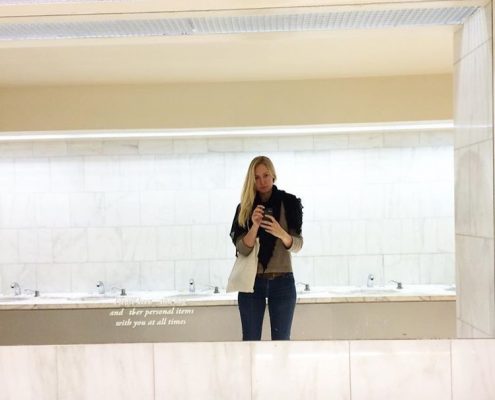 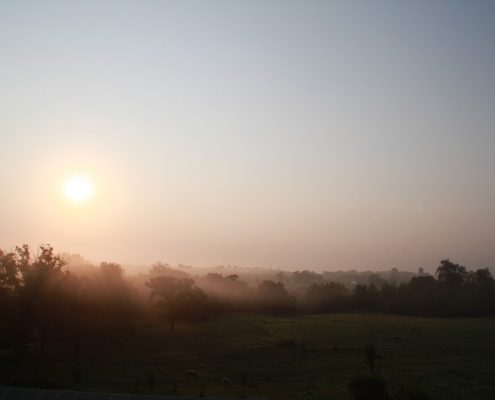 You have found a strong place in the community of adventure riders, do you see yourself as someone who gets more out of your travels knowing that you have a following of people appreciating what you’re doing?

I feel like I’m on the fringes of a community of adventure riders, especially now that I’m not actually riding at the moment, but yes, being a part of the riding community, broader than just adventure riders, makes this trip (and my life) a far richer experience than if I were doing it in isolation.

What values do you think your family instilled in you that you take on the road and bring to your trips?

Kindness, the willingness to try any kind of food at least once, curiosity, the trust that things will work out, and the ability to work to make that happen.

Do you see yourselves as someone who took a leap of faith to live in an unconventional way or do you think it kind of just happened?

I don’t know how to live a conventional life, but any major change, like the start of this trip, takes a huge leap of faith. Before starting anything like this I tend to go through a period of what might be described as “fear and trembling.” Then I actually begin and it’s the easiest thing in the world.

When I’m on the road the answer to this is usually, “Home.” After this trip I’d like to spend some time in Greenland.