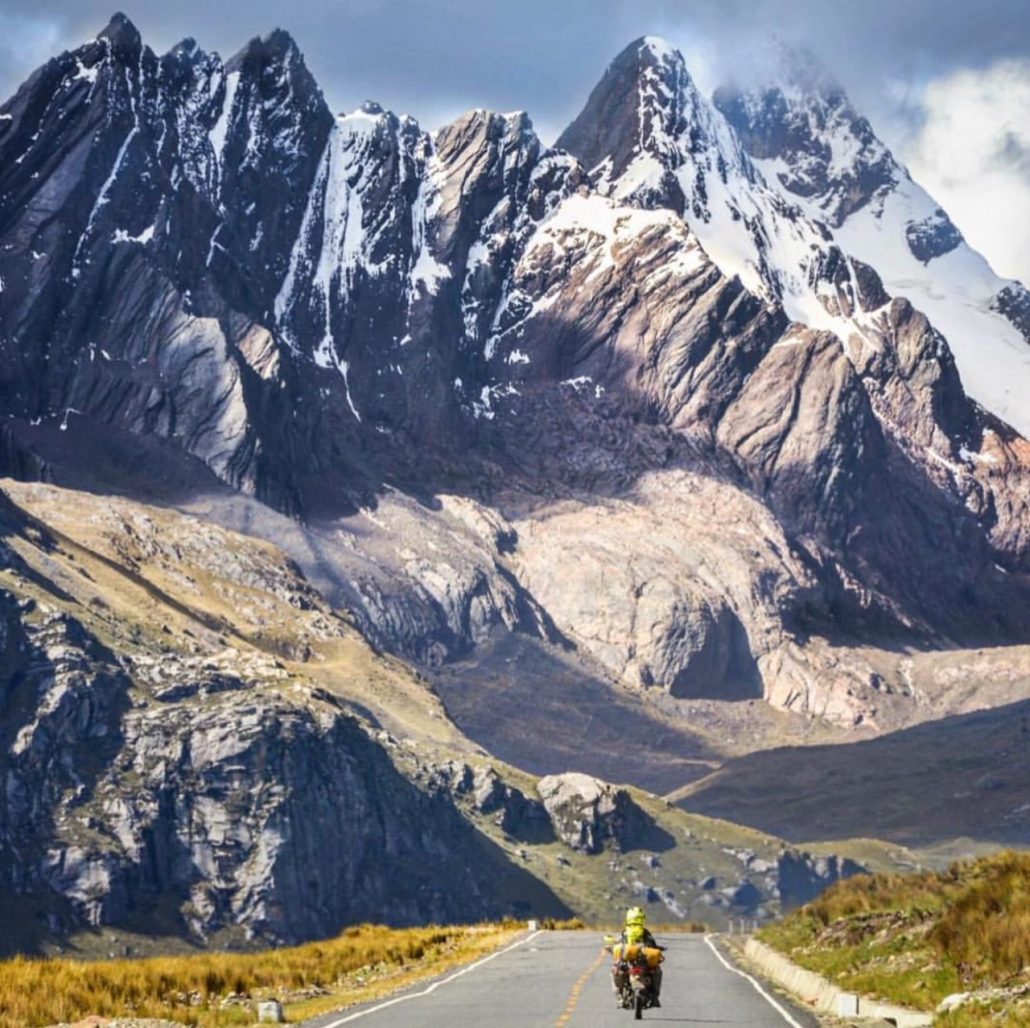 For the sixty seventh installment in our ongoing interview series here at Dirt Orca’s we are very pleased to share the story of Alberto and Naomi, or as you may know them, @Moto_Lara. They are a couple of top shelf adventure riders.

I heard about these two from our friends Michnus and Elsebie of Piki Piki Overland and I was immediately impressed with their travels and photography. @Moto_Lara has ridden from Canada to Patagonia and completed many of the United States’ best adventure rides.

Alberto and Naomi’s website is called www.motolara.com/  – There you can learn more about their adventures together and purchase their Adventure Riding Calendar.

It is always nice to see pairs who ride, either on individual bikes or two up. Sharing these kinds of adventures with people you care about helps cement the experiences in our memories.

Alberto and Naomi are great reminders to make sure you are doing a proper personal accounting of the things you want in life and to find a way to prioritize that.

Check out our great interview below. 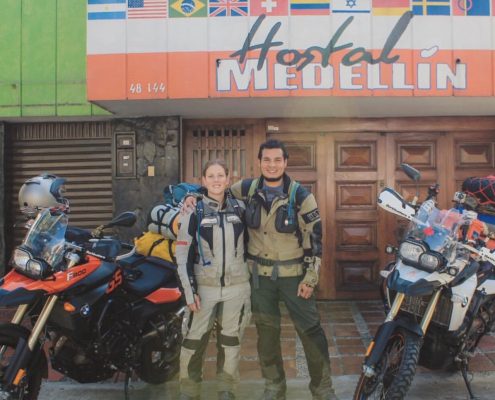 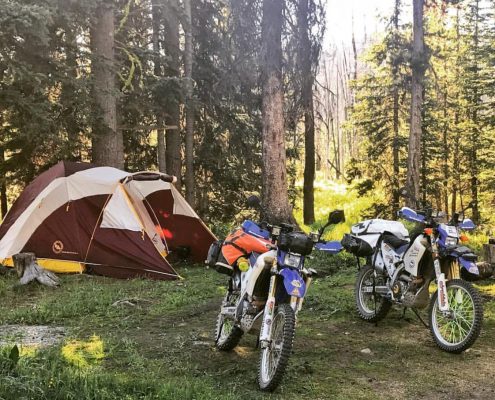 Our day jobs are working as professional Mining Engineers in Canada’s diamond mining industry. Remember that tv show Ice Road Truckers? The mine we work at is one of the many places that is serviced by the winter ice roads featured in that show. The mine location is remote and because of that we work a rotational schedule (2-week on 2-week off). The perk of this is getting chunks of time off for riding trips. It’s a decent compromise!

Currently, our primary adventure bikes are 2013 Yamaha WR250Rs. We each have the same bike. We call them the Little Devils, so not so creatively Little Devil 1 (is Alberto’s) and Little Devil 2 (is Naomi’s). We had previously both used BMW F800GS bikes for adventure riding but caught the bug of smaller bikes because it suited our riding style better. We bought the WR250R bikes off of two Kiwi’s who had used them for travelling across Canada doing the TCAT (and both owned WRs back in New Zealand). They were the ones who first used the term “little devil” when describing how much they enjoyed these bikes. They weren’t wrong, we absolutely love the bikes and what we can do with them.

As I previously mentioned we started out in the adventure riding world with BMW F800GS bikes. I know it is cliché, but in 2008 we watched Long Way Round and were inspired by the concept. We hadn’t really even considered smaller bikes when we first bought the Beemers. We used those bikes for trips around Canada and the USA but most prominently we rode those bikes from Canada to Argentina in 2010. After those collective 50k kilometers of experience under our belts we discovered that what drew us to adventure riding the most was getting off the beaten path, exploring backroads and experiencing remote quiet places. The BMWs weren’t the ideal tools for that job as we were rarely using that top-end power, spending 90% of our time on tight backroads. That is when Alberto suggested we get 250s. The Honda CRF250L had just launched and was really popular but these used WRs came up for sale and we read some many great accounts of people with WRs we decided that was the way to go. We knew these bikes would be super reliable, as there was a huge body of evidence in support of them from the riding community, and tons of fun! It was a great choice that we made. Now, we rarely wish we had bigger bikes. The 250s match our riding style perfectly. We really don’t feel like we’ve given anything up.

For touring / street riding we have sport bikes. A Yamaha R6 (Alberto) and a Ducati Monster 696 (Naomi). AND! Alberto has a super fun Honda Grom to roam around town.

We haven’t done much to the WRs because thankfully the people we bought them from had already set them up for off-road riding. They came to us with the expanded fuel tank, rear cargo rack, beefed up skid plate and Barkbusters hand guards. Naomi’s bike has the Yamalink lowering option (cause she’s a little shorter). We’ve changed the gearing and added some luxury items like auxiliary lighting but they don’t need much in the way of mods 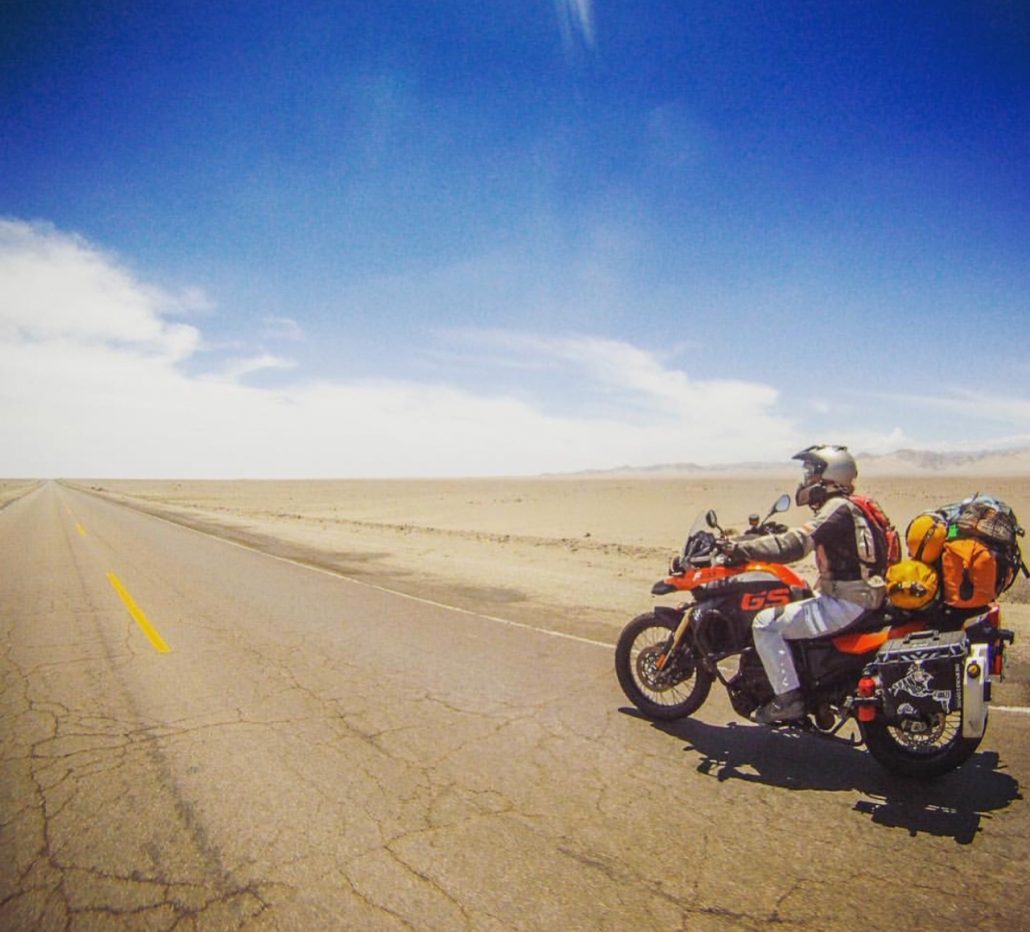 What is your favorite part about it living/working off of your bikes?

The number one thing has to be the freedom. We love the feeling of leaving home with our adventure biking essentials and know that we are self-sufficient for 3 days to several months (just need to buy food along the way). The National Forest network in the Western United States is great. There are tons of roads to explore and infinite camping locations. Riding all day on fun roads and then finding a quiet place to camp at night is the perfect combination! We enjoy camping. Having your whole life on the back of the bike and the ability to stop anywhere and set up “home” is a great feeling. Camping is tons of fun too, we really enjoy how it connects us with nature and forces simplicity. We also enjoy meeting great people during our trips. We’ve made some good friends in this tight community of Adventure Riders.

There are only a few drawbacks associated with adventure riding. It’s nice to come home after a couple of weeks of being riding off-the-grid. A hot bath, good food and a comfortable bed are some of the things that we enjoy coming back home to. But it’s not a big deal, we have so much fun riding that we can compromise on a couple of things.

About 50k kms on the BMWs and about 25k kms on the WRs. Since getting the WRs we’ve settled into a less is more routine and tend to ride quality over quantity. We don’t really ride big-mileage days anymore.

One of the best adventure riding places we’ve ever been is Peru, specifically the Andes highlands of Peru but we roamed around there on 200cc Chinese motorcycles we bought in the country. Our favourite place we’ve ridden the WRs is Utah. The diversity in landscapes is astounding. You could easily spend months and months, or keep going back year after year to keep exploring all that the state has to offer.

There is never just one. You have your favourite places to ride, and then there are those places that are left on the list that you want to ride. We really like riding in Oregon, Washington, all around British Columbia, Colorado is also really great. 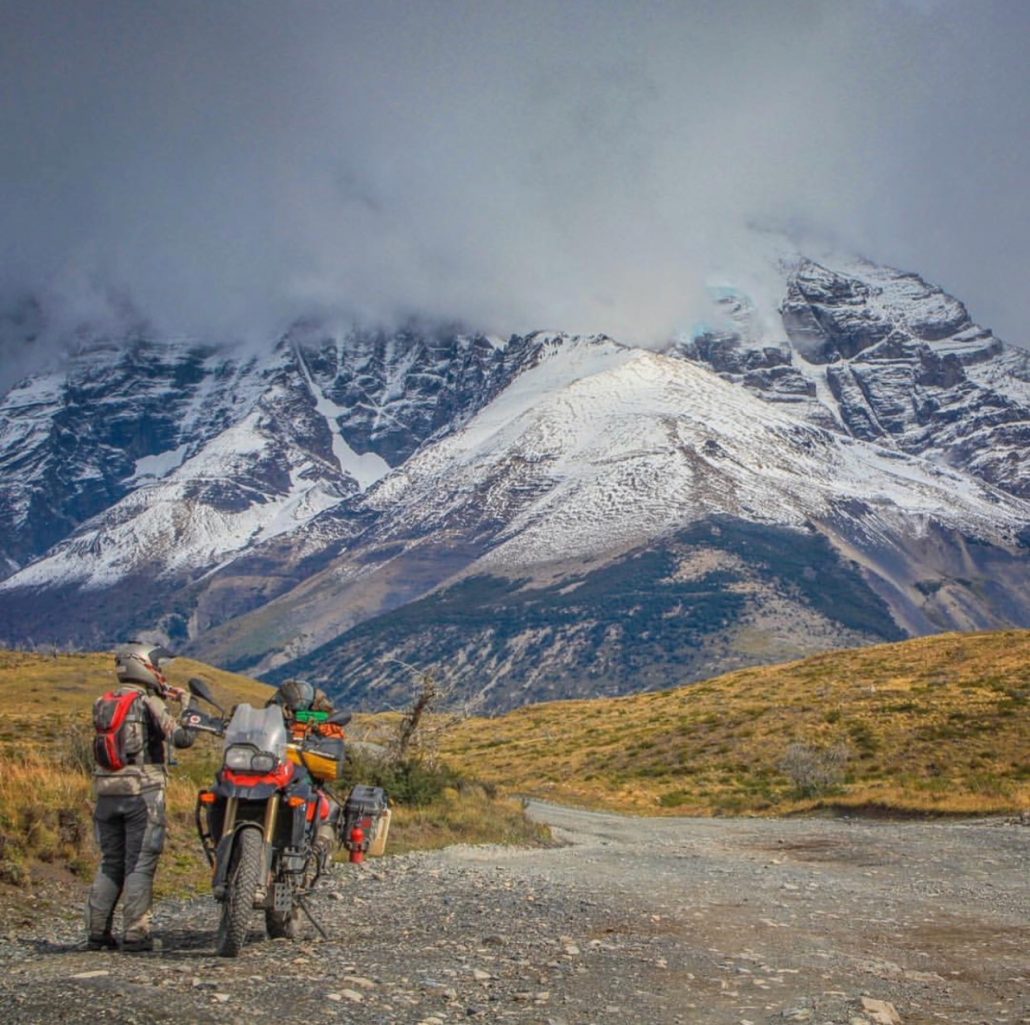 Lockhart Basin in Utah was one of the more adventurous roads we’ve ridden. We also took a detour to the Colorado River that increased the adventurousness. Once of our favourite areas to ride in Canada is the Cariboo-Chilcotin in BC’s interior. There are some amazing loops of roads you can string together just north of Lillooet. For back-top touring, the Alps around Germany, Austria and Italy are simple incredible.

Minimalism. We try to break down our life to the basic parts that bring us the most happiness. Many times less is more!

Discover a rhythm that suits you. If you don’t enjoy camping, don’t waste energy and money on carrying camping gear, use motels, hostels or couch surfing instead. If you are an extrovert and thrive off of social interaction the solitude of camping is also probably not the best choice. Finding a rhythm that suits you will take a bit of trial and error in the beginning but you’ll soon find what works for you. Read about how other travelers are doing and model from their approach in the beginning if you are lost for a place to start.

Both Alberto and Naomi’s parents incorporated travel into their parenting style. Naomi’s parents had a sailboat and lived in the Gulf Island in Southern BC. Alberto’s dad worked in remote mining towns in Peru’s highlands so his family would take road trips to visit him and the surrounding areas. I think for both of us growing up with that as a part of our lives we always had a desire for exploration and learned to enjoy the journey from an early age. 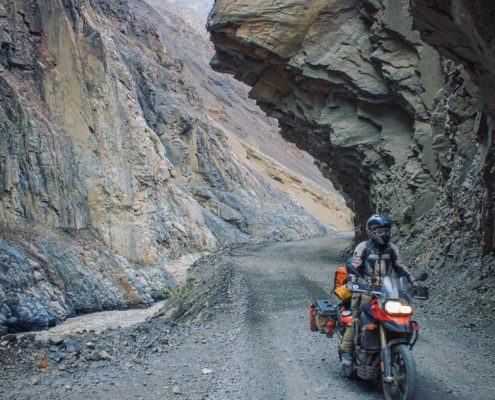 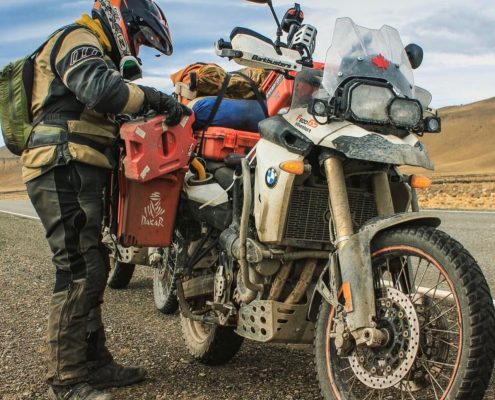 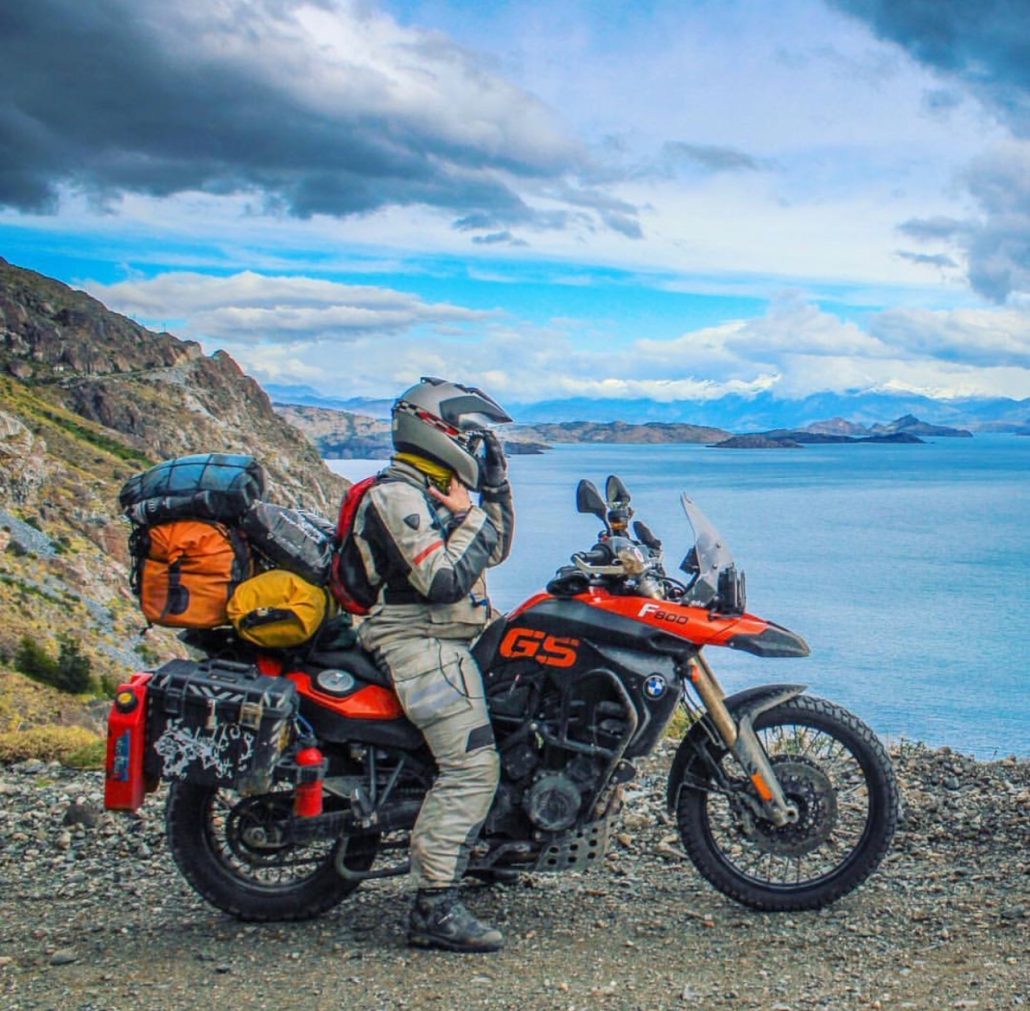 Being respectful to Mother Nature. We’re understand the importance of taking care of the places we visit.

I guess we would fall into the leap of faith category, though as engineers, it didn’t feel like a leap of faith. We considered our options and decided that continuous travel was very doable. The key step here is to make a decision and take action. We had no doubt in our minds we could make it work. After we returned to Canada from being on the road for 8 months we decided we preferred micro adventures over long chunks of continuous travel.

There is always somewhere new to visit and explore. We will continue to explore back-roads in North America as that is very accessible to us, though we like the idea of doing an international trip once every couple of years to spice things up. In the last 5 years we’ve been to South America and Europe so I think somewhere in Asia is in the cards in the future (Pakistan, Mongolia, Tibet come to mind) 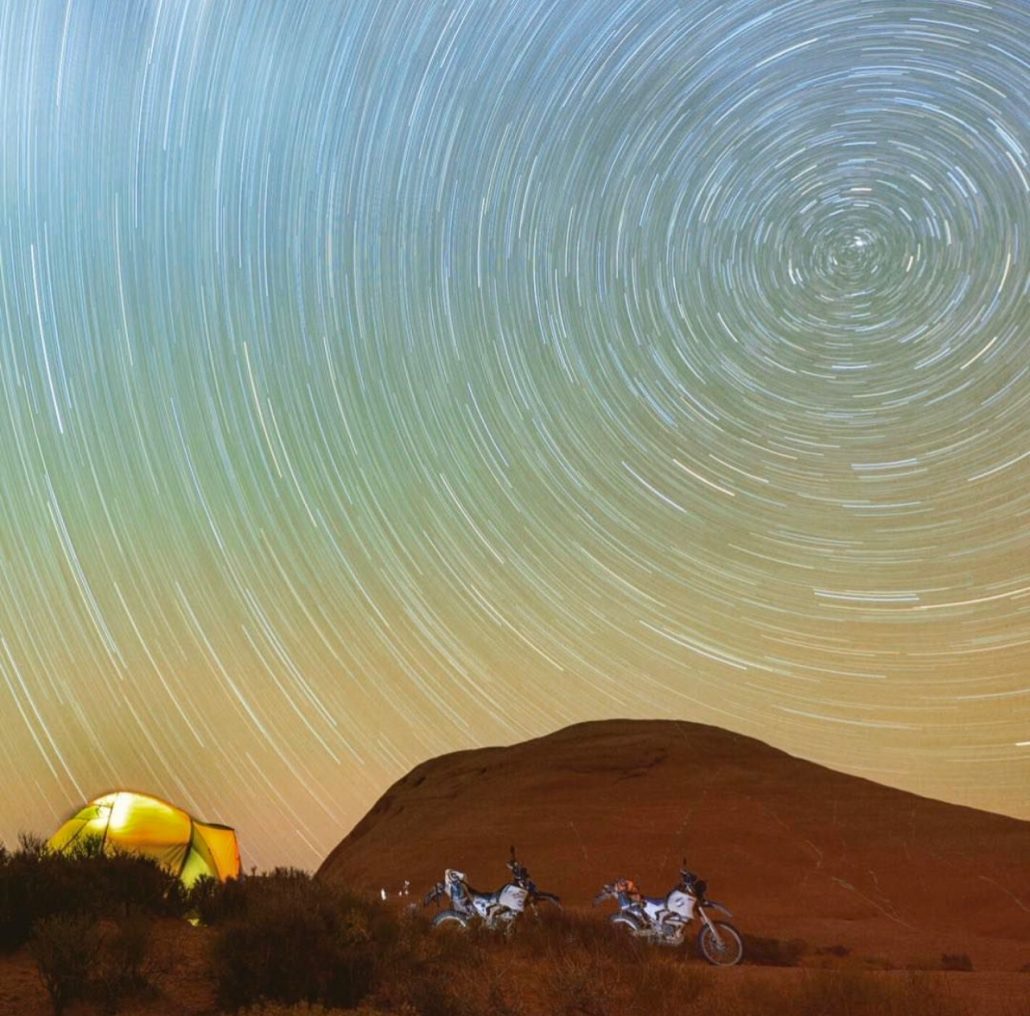 THREE COOL THINGS FOR YOUR EYES