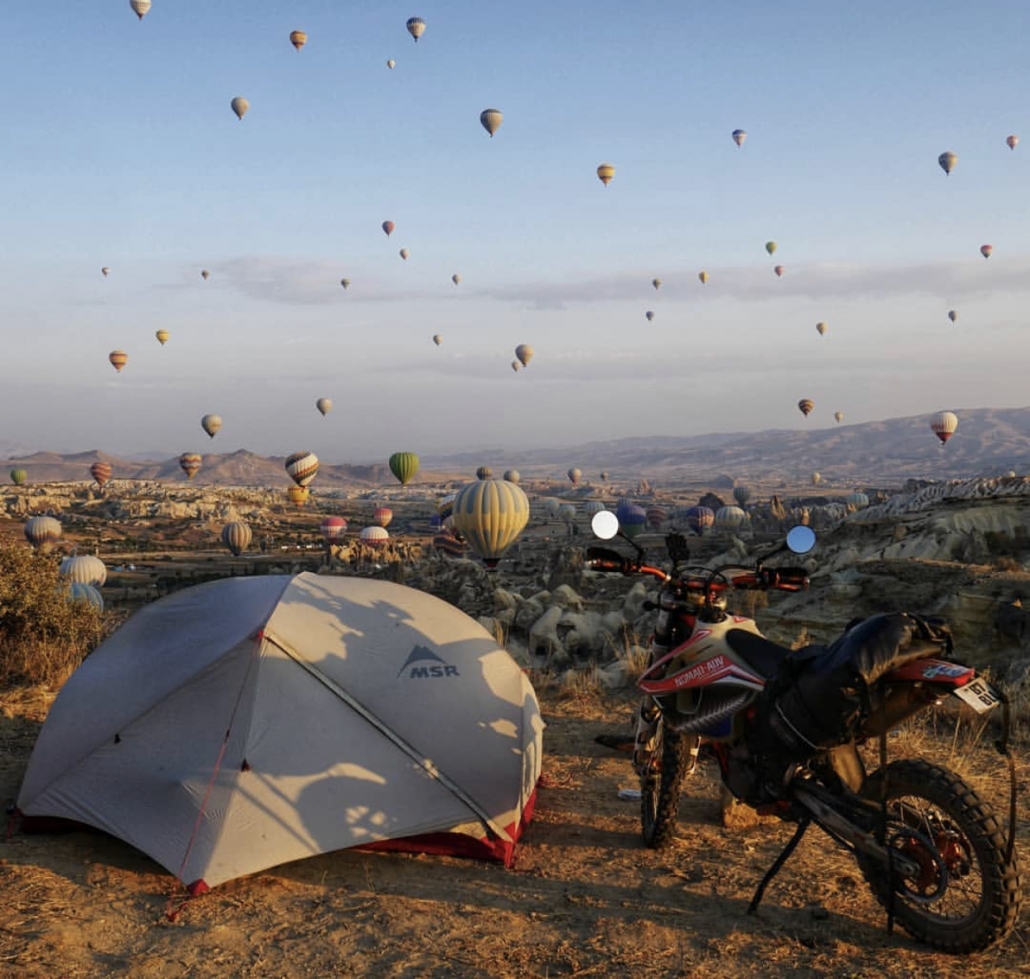 For the one hundred and seventh installment in our ongoing interview series here at Dirt Orcas, we are very pleased to share the story of Aaron Steinmann and his epic round the world trip on his KTM 500 EXC.  You may already know him as the @Braaping_Kiwi.

Yes, you read that correctly. Aaron has undertaken a round the world on the KTM 500 EXC. This is probably really interesting to you if you aren’t already following Aaron on Instagram. He has almost completed his ride that included travelling from New Zealand to the Arctic Circle in Alaska and then from Portland, Oregon to Magadan, Russia. He is currently on his way back where it all started in New Zealand.

On this journey he has visited over 50 countries in basically one years time. A fantastic achievement to be sure, but what makes this particular trip so special is the choice of bike that Aaron made. He chose to complete this journey on a KTM 500 EXC. Few others have done such long distances and heavy miles on such a small adventure platform. A typical choice for a trip like this would have a larger engine and more sturdy sub frame. This means the service intervals are a bit longer and you can easily carry more essential gear.

However on a bigger bike you also give up that off road mobility. Aaron wanted something that wouldn’t hold him back off-road.

You’ll remember videos from Adam Reimann about his Motonomad trips that attempted something similar, but those rides included two to three riders and were typically limited to less than a months time. Aaron travels solo and has blasted past Adams marker and charged head first into unknown territory with this trip. To see him complete this task and smile the entire time should tell all of us a lot about the bikes we are riding and the places we can go.

Check out the interview and photos from @braaping_kiwi below.

What do you do for work?

I’d rather not answer.

I’ve been travelling for 3 years, so I really don’t work much.

My bike is a 2015 KTM 500 EXC.  I call her Tess because I thought if I ever stayed in one place long enough to have a dog, that’s what I call it. She is named after a working dog I remember my uncle had on his farm when I was a kid that I took a shining to.

How? Silly question I brought it from a shop.

I didn’t consider any other bikes. The sales person was trying to steer me towards the KTM690 when I told him what my intentions were when I brought it. He thought I was nuts, but wasn’t going to turn down a sale. I often got told it was the “wrong” bike to do what I have done and I continue to do. People think the bike won’t make it.

The first thing I did was put a bigger tank on it, Barkbusters and a Seat Concepts seat.

I left the rest stock but, have since I have put Haan wheels with cush drive on it, Renthal fat bars, Scotts sub mount steering damper, RHK clutch cover, Samco hose kit with thermostat delete, FMF power bomb header with Q4 silencer, bigger foot pegs, KTM brake away levers, rear disc guard, grab handle, different brake and shift lever and a stiffer rear spring.  Not part of the bike but I use the Giant Loop coyote bag with 2 possible pouches for my oil to keep it separate from the rest of my gear and their Tillamook top bag for my tent and sleeping bag etc. 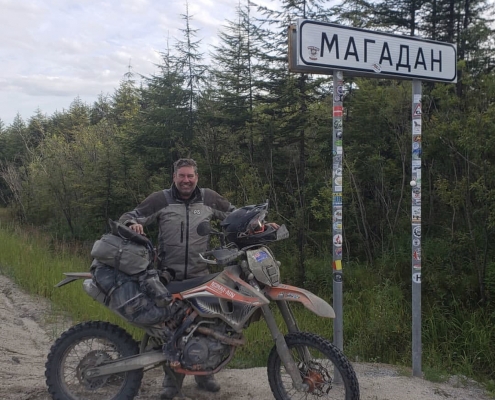 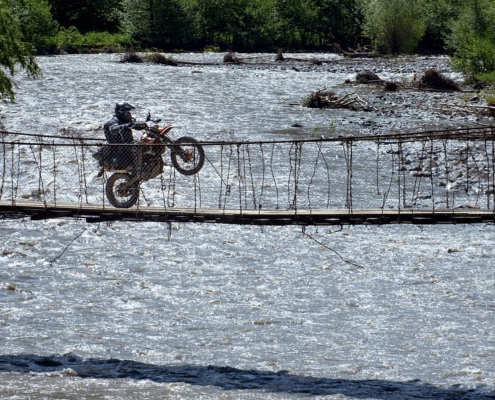 The most favorite thing is the total freedom you get.  I usually only plan a few days ahead and often don’t know where I will be saying that night when I take off in the morning. Planning is way overrated.

My least favorite part is dealing with bad weather conditions.  Packing up a wet tent or at the end of the day just trying to find a place to stay.

What is the best place you have taken your bike is just like asking what your favorite country you have been to is. It is really a very near impossible question to answer.

It is easier to answer where I wouldn’t go again and even then it isn’t one country it might be just one part of that country you didn’t like.

Prime example of that for me is Morocco.  I have the perfect bike for the sand dunes and I thought the Sahara was stunning and camping there was a real experience.  Also some routes I took in the Atlas Mountains were great yet I hated Marrakesh and would never return there.

With my bike I hate big cities and been stuck in traffic so I have tried to avoid them. 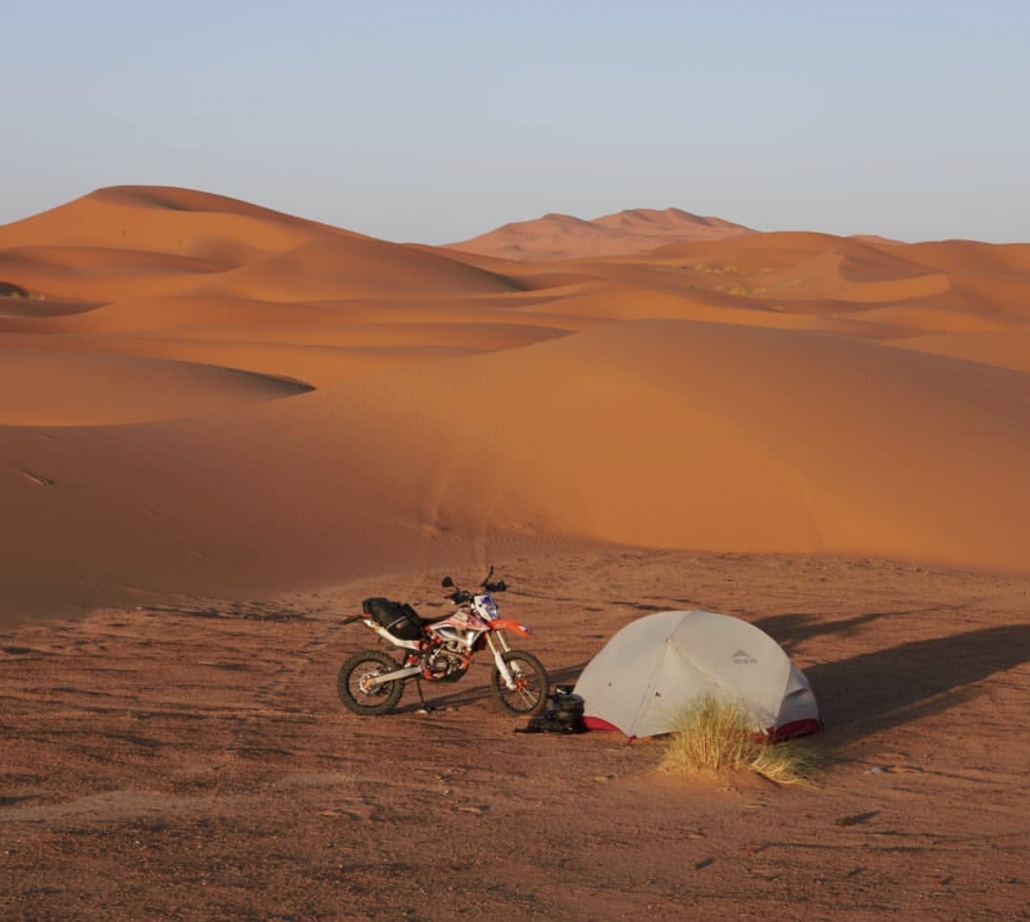 My favorite road is also a tough one as after 123000k including a lot of the BDR and riding the TET through a heap of countries there have been many.

The Dalton HWY was up there because it was the end of the continent and the leg of my journey that took me from the bottom of N.Z to the top of Alaska.

I just finished the Road of Bones and it wasn’t perhaps as much of the road that was my favorite, but the fact that it was a challenge. When I got to Magadan it was the end of a true RTW (within my ongoing journey) from the west coast of the States (Portland, Oregon) to the far east of Russia.

It had taken over a year and it felt pretty good to have completed it.

Perhaps my favorite road would be one that isn’t paved.

I would say don’t overthink it or over plan it.  Let your journey unfold in front of you. Time is your worst enemy and those who know go slow.  It’s nice to be able to wait out a rain day and not feel like you are getting behind on your schedule.

It takes a special kind of person to recognize that the journey, not the destination, is the point of life. Travelers know this. Was there a point in your life where you became conscious that you were that kind of person?

I think the point that it changed for me was when I had thought I was finished with my journey once I got to Portland and I had starting to apply for jobs.

I couldn’t get out of the habit of looking at google maps. My little blue dot was just stopped and not going anywhere.  It didn’t look like a place my journey should finish as it made more sense to finish it off by going to the top of Alaska.

Pretty much the day I decided to continue I got a really good job offer that I probably should have taken as it was a step up for me career wise. Yet I knew my heart wouldn’t have been in it, so I turned it down and not long after I was back on the road living out of my tent. I’ve been homeless all summer. 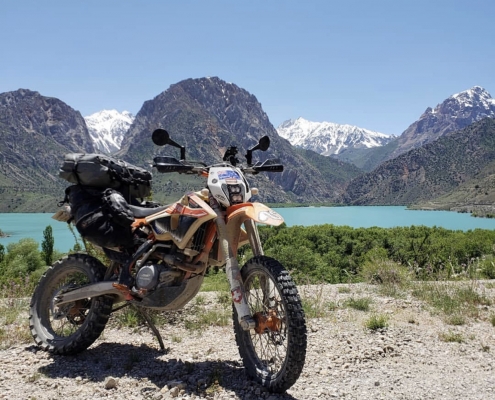 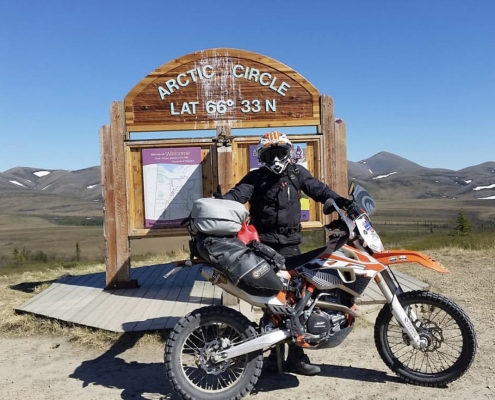 Sounds funny but I got a fortune cookie one day that said.  Get your mind set and let confidence lead you on. It really stuck with me. I was just about to undertake a full remodel of a house I had brought yet I really had no idea how to do any of it and I kept that piece of paper pinned up on the wall as a motivator.

I have used that same mantra since I left New Zealand regarding my journey.

I’m not sure if it was a leap of faith but more something I thought would be really fun to do.

I had just done a short trip in Laos and Thailand where I had rented bikes and travel bug got me again. So after I decided that I would move back to Portland from New Zealand I thought that riding a bike there would be better than taking that long flight.

To the bottom of New Zealand where I started this journey and then I can say I’ve completed the job…. For now. 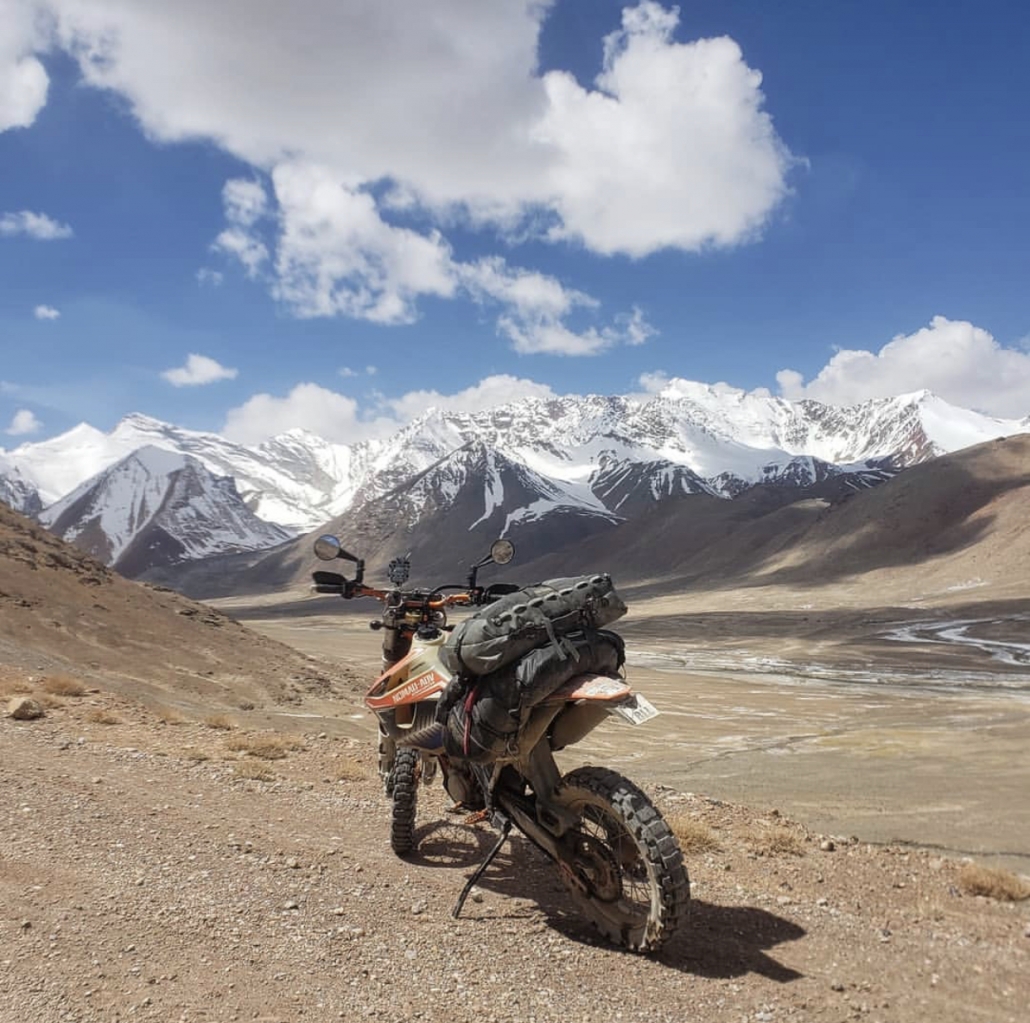 CONTINENTAL TKC-80: AN ODE TO A TITAN